Kathmandu is famous for its casinos. Bikini-killer Charles Sobhraj, recently freed from a Nepal prison and flown to Paris, used to pick up his cash-rich victims—both blondes and baccarat-playing billionaires—from there.

The CIA, SVR, MI6, ISI, Guoanbu (yes, that’s China’s) and even our R&AW are said to have invested heavily in some of these watering holes where their 007s play cards, and exchange fake calling cards and genuine tip-offs. The last few weeks have been busy season in those bright-lit casinos and dim-lit political betting dens. Nepal was going to polls for the second time under its republican constitution. Spies were milling around the dens, making contacts, paying off fixers, and directing blondes to the right political bedrooms.

After Nepalis kicked out their king, declared themselves a republic in 2008, and gave themselves a constitution in 2015, Nepal has become more like France after the revolution. The French changed not only governments as quickly as they changed spouses, but also their constitutions. 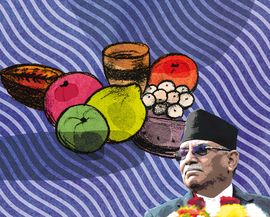 The Nepalis have not gone as far as making new republics, but their politicians have been changing partners at the drop of a dhaka topi, much like the French have been in their private and republican lives. Though they had only two elections under the new statute, they have had half a dozen or more governments since 2015, with parties changing partners every few months.

The three principal players in the current power reckoning are the India-friendly Sher Deuba of the Nepali Congress, the China-enamoured K.P. Sharma Oli of the Communist Party (UML), and the Maoist guerilla-turned politician P.K. Dahal aka Prachanda. Once an India-hater, Prachanda has changed partners and stripes six times to become PM thrice since he joined surface politics in 2008, and been more amenable (to India) than Oli of late.

Having once time-shared power with Deuba, Prachanda made a deal with Oli in the 2017 polls at the behest of the Chinese. He merged his party with Oli’s and let Oli rule during the first half of the five-year term while he headed the party. The deal was that they would switch jobs in the second half. But in mid-2020, Oli asked—deal? Which deal?

Soon the supreme court nullified the merger, and the two parted as bitter foes. The Chinese envoy tried her best to get them into the power bed together again but failed. As Oli fell, Deuba became PM with Prachanda’s support.

As the 2022 polls neared, Deuba and Prachanda formed a five-party phalanx against another Oli-led coalition. The understanding was that if the phalanx wins, the two would have another 50-50 timeshare deal.

But even as early results indicated that none would get majority, the wily Oli called Prachanda and offered him PM’s job in a coalition with him. He also dialled Deuba and offered him the same.

Poor Deuba thought he would have the premier job whichever way the chips would fall in the electoral casinos. On the one side, he had a pre-poll tie-up with Prachanda; on the other, he had the offer of a tie-up from Oli. Little did he know that Oli’s offer was a red herring. Oli wanted Deuba to refuse Prachanda’s demand for first shot at PMship. Deuba did exactly that, Prachanda walked out, did a deal with Oli and got himself sworn in for the first half of their five-year term.

It is now a team of strangest bedfellows. There is even a royalist party, seeking to put back a king on the throne, in the communist-led coalition.

How long will the team last? Read the Chinese tea leaves.