Satraps and sultans with black beards

Himanta Biswa Sarma is credited with delivering not only Assam but most of the northeast to Narendra Modi. Great job, considering the BJP had never set foot in the northeast earlier. Since then he has helped capture Maharashtra; he gave Eknath Shinde's rebel MLAs a safe house. Critics say, his agents are active in Jharkhand and other opposition states spreading disaffection, currency and coup prospects.

No one knows how true these tales are, but he did execute a coup last week. He turned a centuries-old federal political narrative upside down.

First a tale of emperors. The men who have sat on the Delhi throne have always coveted the distant marches—the Deccan, Rajputana, Kashmir, Punjab, Malwa, Saurashtra, Bengal and so on. Mediaeval Indian history is full of tales of how the fortunes of the sultans and padshahs of Delhi swelled and ebbed as they won and lost these regions. When it was a win, the campaign commander was invested with the satrapy. When satraps revolted, empires declined. 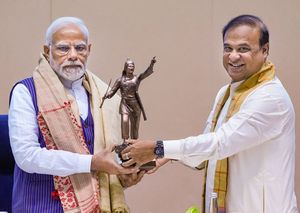 Sarma's walkout from the Congress, too, had an imperial setting. Once when he walked into Rahul Gandhi's court in 2016 to air his woes, he found the crown prince keener on feeding his dog. A perfect Mughal tale of a satrap's revolt after being insulted in the imperial court.

Political pundits in post-Independence India have been drawing on such tales when they had to describe the poll prospects of big parties in provinces. A victory or a loss for a national party (the Congress, most times) in a state poll was likened to an emperor (a Mughal, most times) winning or losing a province. Thus the eastern marches have been on Modi's look-out ever since he was elected to the Delhi throne.

Sarma snatched Assam from the Congress and delivered it to Modi. Then as convener of the BJP-led Northeast Democratic Alliance, he delivered most of the region, including the communist redoubt of Tripura. Like a victorious commander being rewarded with a satrapy, Sarma was invested with the CMship of Assam, though after a one-term delay.

All the same, the imperial narrative did not suit the BJP's nationalistic mythology wherein the sultans and padshahs of Delhi are invaders with black beards. Last week, Sarma used the 400th birth anniversary of the Ahom hero Lachit Barphukan to turn the tale around into one of a provincial champion fending off the sultans with black beards.

The Barphukan saga is indeed a tale of grit, glory and gore of the Ahoms, a people who had never been conquered by any of the Delhi suzerains. (The British were ruling from Bengal when they annexed Assam in the 19th century.) Barphukan was the commander of the Ahom army that launched a surprise naval attack from the Brahmaputra on the Mughals at Saraighat in 1671 and routed them. To Sarma, “It was a victory that saved the identity and civilisation of Assam and northeast India from Mughal subjugation.”

Neutral historians may carp that the Mughal army was led by a Hindu, Barphukan was a follower of the Tai Ahom faith, the Ahom army had many Muslim commanders, and so on. But Sarma, undaunted, was in Delhi last week, painting the imperial capital in Ahom colours, complete with street posters and full-page ads in newspapers showing Barphukan's brilliant victory. There were songs, stage plays, a book release and a documentary screening in the Vigyan Bhavan where a three-day show wound down on November 24, with the prime minister and the home minister joining it.

In between Sarma found time to join the BJP's star-studded roadshows in the city's municipal polls! I guess, there is no way stopping the man.