EWS quota: Entitlements will change with every rupee one earns

The individual, rich or poor, is now the central point of the quota discourse

There lived a poor Brahmin on the banks of the Ganga—so poor that he could not provide one square meal a day for his wife and children. One day a wealthy farmer who owned a thousand cows took pity on him, and...

Thus go several Panchatantra stories. Mythology gives you better tales. Call the poor pundit Sudama, and the wealthy cow-owner Krishna. Presto! you get one of the finest stories of class reunion ever told, where two schoolmates meet in their middle age, and recall their innocent prank of stealing each other's lunch-box.

Why am I telling fables here? Hold on.

The mythology so far: in the early days of our Constitution, there were job and seat quotas for the scheduled castes and tribes, who had been deprived of schools and jobs over centuries. The logic was: since their forefathers had been poor and deprived, they had not got the chance to go to school, and they could not compete with the guys coming from well-schooled and well-connected elite homes. It was only natural and historical justice that a few seats and jobs be kept for them so that they could get into positions of power, and join the power elite. 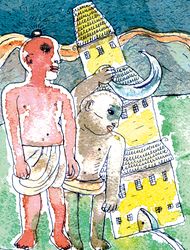 In 1990 V.P. Singh unleashed the Mandal revolution by which jobs and seats were reserved for backward castes, too. The Supreme Court upheld the move, but stipulated that caste quotas should not exceed half the seats available.

Mandal provoked the forward castes to protest. Critics of caste quotas pointed to the “poor Brahmin” stories to demolish the argument that upper castes have always enjoyed entitlements. If they enjoyed entitlements since the age of Bhagavata Purana, Panchatantra and Manusmriti, how could those stories feature Brahmins who were poor, and Yadavs who went to school and prospered in life?—they asked.

Narasimha Rao defused what would have turned into a caste war by refusing quotas to the rich (creamy layer) among the backwards, and privatising the economy. In effect, he told the upper castes to leave the ill-paying sarkari jobs to the Mandalised masses, and make more money from the liberalised economy. It worked—as long as economies did well.

But private economies are fickle. A run on a funding firm in the US, a meltdown in the far east, a pandemic, or a war in Ukraine would bring down stock prices, turn profits into losses, throw tycoons into penury, cut pay cheques, and chuck out millions from white- and blue-collar jobs. While such things happened off and on, the government, which had been getting richer with revenues, kept hiking staff wages all along.

In 2019, Parliament amended the Constitution reserving 10 per cent college seats and government jobs for the poor among the forwards. Most parties—the rightists, leftists and centrists—said aye. A few days back, the Supreme Court upheld the law.

Most are celebrating, but few realise the paradigm shift that the judgment brings about. Quotas were for castes and classes till now, they will now be for individuals. Class, well-heeled or deprived, is no longer the central point of the quota discourse; the individual, rich or poor, is. Quotas will become dynamic. Entitlements will change with every rupee one earns. And the 10 per cent limit could be temporary. Is it good or bad? Let jurists, sociologists, economists, law-makers decide.