In haggling over free trade, Sunak may be a tougher nut to crack

David Cameron had foretold this, once in the presence of Narendra Modi—that there would soon be a day when the monarch calls a Singh or a Patel as “my prime minister”.

The day has come. Rishi Sunak has been on his way to 10 Downing Street, since Liz Truss quit in 40-odd days. The old warhorse Boris Johnson tried a trot or two; he retired on Diwali. Since then, Bob's your uncle, Rishi.

Record-keepers say, Truss's has been the shortest tenure, breaking the record of George Canning (father of the first viceroy of India) who lasted 119 days in 1827. Actually, no. Britain has had PMs with shorter tenures than 'little' Liz. Lord Bath was there for two days in 1746; he couldn't find anyone to join his cabinet. Lord Waldegrave was PM for four days in 1757. 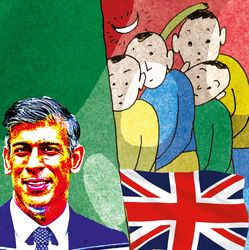 Even the celebrated Arthur Wellesley (later Lord Wellington), who had earned his spurs in India and defeated Bonaparte at Waterloo, falls in this group. In 1834 he wet-nursed a cabinet for 25 days till Robert Peel returned from Europe. Later, the Iron Duke did have an actual stint of two years, but didn't leave any mark. He was a bad prime minister.

Ever since Robert Walpole left after a 20-year reign, most British cabinets have been short-lived. Britain proves that regime stability is not a prerequisite for economic progress. Even when they were ruling a third of the world, governments were being made and unmade in weeks and months in London. In fact, they got stabler governments after they began losing global dominance.

Let's leave those to the British voters, and look at what we think is an India story being made in London. Sunak will be the first PM of Indian origin; he swears by the Gita; worships the cow. Cut it out; Queen Anne is dead.

The big news is—Sunak will be the richest PM that Great Britain has ever had. His net worth is about £730 million, nearly 300 million more than that of Lord Derby, the richest till date. Derby had a personal fortune of over £7 million, which is about £444 million in today's money.

But before we Indians toast with the finest scotches, let's drop some ice. Personal wealth need not make great prime ministers. Derby, who had three short stints in the 1850s and 1860s, was an average performer.

On the contrary, some of the greatest were poorer than a church mouse in the Westminster Abbey. William Pitt, the youngest (not even 25 when he kissed the king's hand) and one of the greatest, was the poorest. He had a debt of £40,000 (now over £1 million) when he formed his first government. He is remembered for keeping Britain out of the messy politics and Napoleonic wars of continental Europe, but blocking Bonaparte in the waters around Asia and Africa, ending corruption in the East India Company, and bringing parliamentary control over its rule in India.

Youth also need not make one great. Lord Palmerston was past 70 when he moved into 10 Downing Street. William Gladstone was 82 when he made it the fourth time. Both are counted among the greatest.

Let's not delude ourselves thinking that Sunak will be good to India because he has Indian blood in his veins or because his wife is an Indian citizen. Remember, he is a loyal subject of his king and will be as good or as bad to India as any beef-eating Anglo-Saxon would be. In the haggling over free trade, he may be a tougher nut than were Johnson or Truss.

For two reasons. One, he is a better economist than they. Two, with critics watching whether he is favouring the land of his wife, he will be constantly on his toes.

Bob is not your father-in-law.