To tag or not to tag Congress? Opposition leaders cannot decide

What is in a name? wondered Shakespeare in Romeo and Juliet; “a lot,” would be the reply of Telangana Chief Minister K. Chandrasekhar Rao. He has renamed his Telangana Rashtra Samithi as Bharat Rashtra Samithi. The new name, many believe, should take him places, and, perhaps, catapult him to the throne of Delhi in 2024.

Leaders and voters in the north should not have a problem. Good people as they are, they had lived happily through the regimes of southern leaders P.V. Narasimha Rao and H.D. Deve Gowda, and may not object to another southerner ruling India. They may even like the new name of KCR's party, but not necessarily its spelling. Northerners spell samithi as samiti, just as they call the president 'rashtrapati' while southerners call her 'rashtrapathi'. That's a minor issue of the aspirate—pun intended.

Come to think of it, shouldn't we be having a national spelling before we ask for a national language? (Hindi, many may not know, is not 'the national language of India'; under the Constitution, Hindi is 'the official language of the Union', a status it enjoys alongside English.) That is a point to ponder for Amit Shah and his home ministry mandarins, the guys who mind our tongues and often get a tongue-lashing from M.K. Stalin or Pinarayi Vijayan. 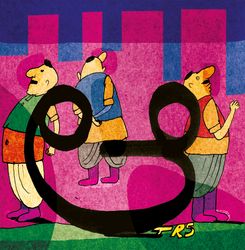 Stalin and Vijayan could take a page from good old E.K. Nayanar's language textbook. When UP CM Mulayam Singh Yadav sent him a letter in Hindi in 1990, the Kerala CM replied in Malayalam. Tongue in check!

KCR should have no issues with language. He is the one who got India's newest state carved out on a non-linguistic platform out of the first state that was carved out on a linguistic platform. He is fairly fluent in four tongues—Telugu, English, Hindi and Urdu. That is three less than fellow-Telangani Narasimha Rao who knew Sanskrit, Marathi and Spanish, too, but was silent in all seven.

KCR has been jetting around making friends, talking in four tongues, and influencing and instigating non-BJP chieftains to form a phalanx to take on the BJP Goliath in 2024. Though a believer in things occult, he is under no notion that a mere name change would catapult him to the Delhi throne in 2024. Earlier too, provincial parties had added national tags to their names, but had not gone much far politically. Soon after splitting from the DMK in 1972, M.G. Ramachandran added All India to his Anna DMK, but stayed put in his state. N.T. Rama Rao toyed with the idea of converting his Telugu Desam to Bharat Desam, but gave it up as he got caught in the vortex of the United Front politics of V.P. Singh. Though she parted ways with the Congress as Trinamool Congress, Mamata Banerjee attached an All India tag soon but has not gone much far from her Bangla grassroots. Two years ago she quietly shed the 'Congress' tag from her party's logo.

To tag or not to tag the Congress is the issue that opposition leaders can't decide. Nitish Kumar, Sharad Pawar, Stalin, Lalu Yadav et al think that a Congress-less coalition would be pointless, since the Congress is the only non-BJP party that still has roots or branches in most states. On the other hand, Mamata and KCR believe that the Congress tag would prove to be a millstone around their necks, since their fight in their own states is as much with the Congress as it is with the BJP. The others are yet to make up their minds.

Either way, the road ahead looks like what Saint Nizamuddin Auliya said when he heard that Sultan Ghiyazuddin Tughlaq was riding to Delhi with murder on his mind: Dilli hanoz duur ast (Delhi is still distant).