Why the greatest legacy of monarchical Britain is parliamentary democracy

A lot of India's parliamentary practices evolved from British practices

Elizabeth Regina Secunda missed a letter by four years. Had she lived till 100, she would have had to write to herself.

Her grandfather, George V, the guy whose statue used to stand near India Gate (where Netaji Bose stands now), started a practice of the monarch greeting the subject on his or her 100th birthday with a telegram or a letter, and then one on every birthday after 105. With about 700 people in the UK turning 105 every year, and several more 100, the old girl used to write about 14,000 birthday greeting letters every year.

It is such traditions that keep the British royalty linked to the people, have helped their monarchy to outlive their empire, and also survive the nasty scandals in the tabloid-ruled modern world. Elizabeth followed those with élan. As Narendra Modi tweeted, “Her Majesty Queen Elizabeth II will be remembered as a stalwart of our times.... She personified dignity and decency in public life.” 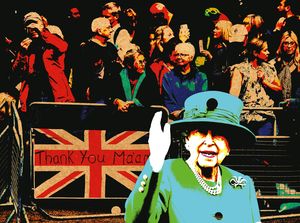 In England they say, the king is dead, long live the king. In the days of decolonisation, many had predicted that monarchy would not survive the 20th century. Farouk, the last king of Egypt, predicted differently. He said five kings would survive into the 21st—the kings of hearts, spades, clubs, diamonds and England.

Both predictions have been off the mark. There still are a few monarchs hanging around in Europe, but none who is as envied as the British whose empire rose in an Elizabethan age and ended in another. It was Elizabeth I who gave the charter to the East India Company to trade with and profit from the east. By then she had built a powerful navy, some of its fleets led by buccaneer-admirals, that would soon rule the world's waters.

Though the British left India during George VI's reign, it was during his daughter Elizabeth's reign that the sun really set on the empire. No tears. New suns of liberty rose in the old colonies, where people began to rule themselves with liberal laws. Ironic it may sound, but the greatest legacy of monarchical Britain has been the ideas of parliamentary democracy and liberal law.

Indeed, a few did not last long as democracies. Among those that did, India turned out to be the finest, where people continue to vote in good governments and vote out the bad. We, too, have a bicameral parliament like in England, one of them seating popularly elected members, a Prime Minister-led executive that is accountable to the house, a head of state aided and advised by that executive, a legal system that accords parity between the mighty state and the common man when they are engaged in adversarial jousts, and a common law system that respects decrees made by similar courts earlier and elsewhere.

A whole lot of our parliamentary practices, especially concerning the relationship between the head of state, the executive and the legislature, have evolved from British practices. The president addressing the joint houses, the lower house having primacy in deciding on money bills, quaint practices such as the leader of the house and the opposition escorting a new speaker to the chair (in England, they drag him, a custom that began after 17th century kings vented their anger on speakers for Parliament's hostile decisions), voice votes being taken as 'ayes' and 'nays'—these and several more have evolved from the days of the Magna Carta, through the English civil war, their brief fling with Oliver Cromwell's republicanism, the Glorious Revolution, and the age of Georgian lethargy when kings resigned themselves to reigning, and prime ministers started ruling.