Finally they have found the fall guy in the Ferozepur fiasco—a superintendent of police. His ineptitude had led to the prime minister having had to spend 20 nail-biting minutes sitting in a car on a highway on a cold day, while angry farmers were blocking the road in Ferozepur district last winter.

That was no trivial matter. The prime minister of India is one of the most threatened—therefore most protected—persons in the world. His safety and security are of prime importance to the country. Taking it lightly was a serious lapse.

But did it need the judicial majesty of the Supreme Court to find the fall guy? 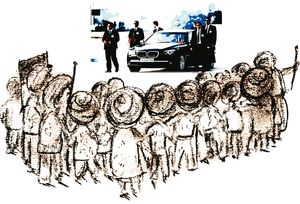 Indeed, there was a blame game between the Congress-ruled Punjab and the BJP-ruled Centre, but neither the Centre nor the state had gone to court to get the dispute settled. The court acted upon a public interest petition, took the consent of both parties, appointed a probe committee headed by a retired judge and ordered both governments to shut up and part with every shred of paper and every bit of digital byte relating to the matter.

The committee submitted its report last week in a sealed cover. The court opened it, read out parts of the report, put it back in the cover, resealed the cover and asked the registry to tell the Centre about it. The government can take it, read it, accept or reject the suggestions and perhaps amend or update the blue book.

Pray, what great constitutional or statutory issue was involved in this so as to agitate the wisest judicial minds of India? Such lapses have occurred often, and the home ministry and the Special Protection Group have taken corrective measures. The worst was in 2006 when a pilot vehicle guided former prime minister Manmohan Singh's carcade into a bylane with a dead end in Thiruvananthapuram.

The court could at least have used the chance to clear up the federal fog in the Constitution, and lay down as to whose way shall prevail in case such Centre-state disputes occur again. But what the court has done now is what could have been done by the home ministry. After all, they write, erase, score out and overwrite on the pages of the blue book.

The blue book, if you don't know, lays down the details about the security given to the president, vice president and the prime minister, while the yellow book details the security given to other VIPs. It even stipulates the drill to be followed when VVIPs are in their offices, out on the street, addressing meetings, attending events, driving, walking, flying, eating, and even fasting.

The book says the SPG, who guard the person of the prime minister through thick and thin, day and night, rain and shine, should have a meeting with everyone who is involved in securing a PM event three days prior. Everything is finalised at the meeting—which route the PM will take, which alternate routes would be available, would he drive or fly, who all will meet him where and when.

All this was done at Ferozepur, too. It had been fixed that the prime minister would take a chopper from Bhatinda to Hussainiwala in Ferozepur district, where he was to visit a martyrs' memorial. But the weather turned bad for choppers to fly and the PM took the road. The fiasco, apparently, was that the SP hadn't secured the road as he was bound to.

TAILPIECE: The only time when the SPG is reported to have fired was in 2000 when a few students mobbed former prime minister Chandra Shekhar at a railway station in Ghazipur, UP. When the mob pushed its way into the coach, the guards had to fire, killing one and injuring another.