From Irwin to Murmu: The house of political stability

Presidency is largely symbolic, but not totally

On Monday the 25th, India will get its 15th president. Counting from Lord Irwin who nauseated Winston Churchill by receiving a half-naked fakir on its steps, she will be the 21st occupant of the magnificent mansion on Raisina Hill. Droupadi Murmu's climb up those majestic steps will be another of the giant strides that India has been making towards an inclusive polity. Since its formation, the republic has been presided over by freedom fighters, politicians, educationists, three Muslims, two Dalits, a Sikh, a diplomat, a labour leader, a scientist, a philosopher, a woman, and more. Now we get a learned lady from the marginalised tribes to head the republic, to protect its Constitution, and to command its armed forces.

The presidency is largely symbolic, but not totally. The real power lies with the council of ministers and, in effect, with the prime minister. On most occasions she is bound by their advice. The land is ruled in her name; the laws are made in her name; the armed forces are commanded in her name. Yet, unlike the queen of England, she is not the sovereign even in name; in India, the people are. The president's real power and skills are tested when the sovereign fails to decide as to who should rule them—when they fail to give clear majority to anyone. Then the first citizen—the term and concept are American—decides for them. 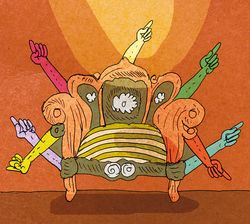 Three successive presidents faced that challenge, and all three rose to the challenge. When no one could command half the house after the 1989 polls, R. Venkataraman summoned leaders of the parliamentary parties in descending order of their strength—leader of the largest first, second largest next and so on. The first, Rajiv Gandhi, begged off from forming government; the next, V.P. Singh of Janata Dal, said yes. Take charge and prove numbers in the house, Venkataraman told him. That led to the first ever vote of confidence in the lower house. S.D. Sharma improved on it in 1996. He stacked the alliances in descending order of their size, and summoned the leader of each. Thus, A.B. Vajpayee was sworn in as PM, but quit in 13 days when he failed to show the numbers. Next came Deve Gowda; he ruled for a year. K.R. Narayanan further improved on it. Instead of looking at parties by their strength in the house, he looked at the strength of their pre-poll alliances, and also asked the claimants to show him the letters of support they had received. That led to the dramatic moment in 1998 in which Vajpayee, waiting on his toes for Jayalalithaa's letter, exclaimed: “Chitti mil gayee.”

Presidents usually sign on the dotted line on bills passed by the houses, but can send them back (except money bills) for reconsideration. If the bill is passed again, she ought to sign on the line. Zail Singh found a way out of this. When he received the draconian postal bill that Rajiv Gandhi got passed by the houses, he kept it in his pocket, doing nothing. The statute does not give any time frame for the president to sign or return a bill!

Tailpiece: Can a PM who resigned stake claim to form another government with the same house? A king of England and a president of India decided differently.

Labour's Ramsay MacDonald resigned in 1931 when he feared losing majority in the house, but King George V allowed him to form another government with a Labour rump and a few from others. In 1979 Morarji Desai cited the British precedent and asked for a chance to form another government after losing the no-trust vote. An assertive N. Sanjeeva Reddy said he was not bound by the advice of a PM who had lost majority.