Modi's India, like Nehru's, has stayed neutral despite western pressure

The fans of neither of them would approve of me saying so, but Narendra Modi is acting more and more like Jawaharlal Nehru. More so in the way he deals with the big bad world. As discussed in this column once, both have been practitioners of personal diplomacy, and both paid the price for trusting China too much.

Now Modi has taken not a leaf but an entire chapter from Nehru's foreign policy book. He is practising non-alignment, the moolmantra of Nehruvian foreign policy. But why pick on Modi? The world is looking increasingly similar to the way it used to be in Nehru's time when Harry Truman, Dwight Eisenhower, Joseph Stalin and Nikita Khrushchev were dividing the world into hemispheres of hate. Even the language the diplomats speak today is a hark-back to the classic Cold War phraseology used by bullies like John Foster Dulles.

Dulles, if you don't know, was Eisenhower's secretary of state who damned non-alignment as “immoral” and asked every country—Hey, you there! Are you with us or against us? No different was how Joe Biden's envoy to the UN, Linda Thomas-Greenfield, spoke after moving a damn-Russia resolution in the Security Council last week: “Vote yes, if you believe in upholding the UN Charter. Vote no or abstain, if you don't uphold the Charter.” Cheek! 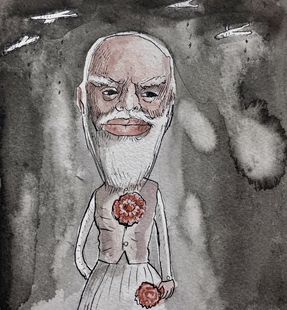 Modi's India did not fall for that, just as Nehru's India had not. T.S. Tirumurti, India's current envoy at the UN, did exactly what Nehru's and Indira Gandhi's envoys did when Khrushchev's tanks rolled into Hungary (1956), Brezhnev's troops swooped down on Czechoslovakia (1968) and Afghanistan (1979), and Putin annexed Crimea (2014). He stayed neutral in Russia's war on Ukraine, aware that it is not at all “immoral” to stay neutral when you are asked to choose between scoundrels. Rather, it is virtuous to be neutral, as Nehru showed the world with his golden non-aligned mean.

Indeed, the west is painting Vladmir Putin as the sinner in this war where he invaded a weak neighbour. But the west has been sinning against him and his Russia for the last three post-Cold War decades, breaking every promise they had made, cheating on every deal, and damning every covenant.

The Russians believe they did a good thing to Europe by disbanding the Warsaw Pact, the military alliance they had with the east Europeans during the Cold War. In return, they expected the west to disband NATO. But NATO cheated. They not only refused to disband, but expanded towards Russia, roping in Russia's ex-allies and placing troops, tanks and atomic arms at Russia's doorstep.

Even the little kind deeds of the past were now proving to be Russia's curses. Back in 1954, Krushchev had gifted Crimea—which had been coveted by the west since the days of Lord Aberdeen and Tsar Nicholas I and where Russia had berthed its Black Sea fleet—to Ukraine. But when Ukraine threatened to join NATO, and sell its soul and Russia's leased southern ports to the west, Putin sent his troops and annexed Crimea in 2014.

Ukraine is at the nasty NATO game again. So is Putin. Only saner counsel like India's can push both back from the Black Sea brink. Worth a try, prime minister! Nothing to lose if you fail. A world to gain if you prevail.

Tailpiece: Though she stayed neutral publicly, Indira Gandhi privately pulled up Soviet premier Alexei Kosygin for invading Afghanistan. “You brought the Cold War to our doorsteps,” she told him, records I.K. Gujral in his memoirs. Later when buddy Brezhnev asked her how he could get out of Afghanistan, she bluntly told him: “The same way you went in.”