Narendra Modi was seen being driven in a Mercedes-Maybach to Hyderabad House where he was to receive Vladimir Putin. That set India’s troll lines on fire. Keypad activists who keep the country’s socialistic conscience cited it as another instance of Modi’s splurge at tax-payers’ expense. Shiv Sena’s Sanjay Raut mocked at the fakir who drove a 12-crore limousine, or the monk who drove his Maybach.

Most of the mature political class has kept away from the troll mob. Wisely so.

Let’s take a closer look at the car and the men who drive in it. PMs since Jawaharlal Nehru till Indira Gandhi had driven in home-made Ambassadors, mostly white. Much is being made these days about Lal Bahadur Shastri’s Fiat bought on a bank loan. It is still parked in the porch of the bungalow that Indira allotted to his widow, and is now a memorial. It was his personal car; as PM, Shastri had a few Ambys. 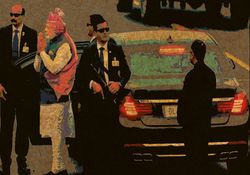 Prime ministerial vehicles became armoured cars after Indira was assassinated. After a sniper took a potshot at Rajiv Gandhi at Rajghat in 1986, King Hussein of Jordan, one of the world’s most threatened men at that time, gifted him two bullet-proof cars. Rajiv, who loved to drive as much as he loved to fly, used to take the wheel himself often, leaving his guards sit with their hearts in their mouths.

It was Vajpayee who threw out the credentials of the old Ambassadors after one of them broke down while carrying him, sending his guards into a tizzy. The attack on Parliament, and Vajpayee’s personal problem of needing to stretch his legs after a knee-cap surgery, made them ask for larger and better cars.

Thus came four armoured BMW 740Li sedans, which let him stretch his legs, kept him safe from bullets, bombs and poison gases, and could drive at 80kmph even on a flat tyre. Only the US president’s Beast and the BMW 750iL that James Bond drove in Tomorrow Never Dies could claim to be fancier in gadgetry. With that, the old sarkari white also gave way to a mean black.

Vajpayee reverted to an Ambassador after demitting office, but his successor Manmohan Singh graciously sent him one of the BMWs when he heard that Vajpayee once had to squeeze out after the Amby’s door jammed.

Manmohan and Modi continued to use the Vajpayee vintage BMW 740Li cars, but not necessarily the same vehicles, along with a few Range Rovers. Prime ministerial cars are changed every two to four years, though we never come to know because they are all the same make, the same black and bear no numbers.

Modi had to look for another make and model after BMW stopped making armoured 740Li models. Thus came the Mercedes-Maybach S650 Guard, which can take steel bullet hits, grenade blasts and even a 15-kg TNT blast at two metres. It is no palace on wheels, and costs much less than the 12 crore being claimed on trolls, but probably a little more than what Vajpayee and Manmohan spent on theirs.

Does he need it? Of course, yes. Remember, the prime minister of India is still one of the world’s most threatened ones among the human species, in league with the presidents of the US, Russia, China, Turkey, and of Sri Lanka when Velupillai Prabhakaran was alive. His car ought to be a battle tank without gun and turret.

TAILPIECE: After a woman missed two shots at US president Gerald Ford in 1975, his chief of staff Donald Rumsfeld (later George Bush Jr’s defence secretary) and the secret servicemen pushed him into his limousine and piled over him, as the car sped. Then Rumsfeld heard a muffled voice: “C’mon Rummy, you guys get off. You’re heavy.”