There was bad news for Afghanistan’s neighbours who gathered for a dialogue hosted by Narendra Modi’s security aide Ajit Doval on November 10. The Taliban, who currently rule over most of Afghanistan, want to have an air force. Wouldn’t that mean terror in the air, and terror through the air? After all, those guys had played host to the man who showed how terror could be launched through the air.

To India, that is a double whammy. For, among the Taliban’s flying machines will be a few India-gifted Mi-35 gunships and Cheetah light choppers. Modi and Doval had gifted them in good faith to the Ashraf Ghani regime in 2015 and 2019, thinking those would keep the Taliban away. But the Taliban, while blazing their way into Kabul last August, captured them from Kunduz. 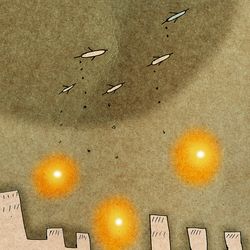 The toys that we gifted are nothing compared to what the Americans had given. They gave the Afghans enough flying and firing machines to equip half an air force and army. Thank God, Afghanistan is landlocked; otherwise, the Yanks would have left behind a few gunboats, too.

Indeed, the Americans, as also the Afghan military that fled with them, had left most of their guns spiked, powder wet, choppers without rotors, and airplanes with wings broken. All the same, a bunch of mechanics should be able to cannibalise the machines and hammer together a few flying machines (jugaad, as we call this machine art) to make a decent squadron or half.

The Afghans are fast learners. Air Chief Marshal Dilbagh Singh, who had trained the Afghans to fly fighters in the 1960s, had written in his memoirs that it was like “teaching flying to those who had not ridden bicycles.” But the boys took to the skies in no time, like swallows to air.

Believe me, the Afghans are good at jugaad, too. I have flown in one such welded-together military Antonov-28 over the Hindukush, sitting on a wooden bench and hanging on for dear life with my feet thrown over the luggage pile, way back in 2001. The plane even had a tyre-burst at full-throttle speed, seconds before it was to get airborne.

As for pilots and mechanics, well, there are close to 150 of them from the old Afghan Air Force hiding in Tajikistan since August, some with their flying machines, cursing the Yanks who had let them down. The Taliban only have to offer them amnesty, and most would fly home to embrace their wives.

The military landscape around Afghanistan is also changing. China, which has a paramilitary station near the Wakhan Corridor in Tajik territory, ostensibly to check on Uighur terror, is said to be seeking a full military base. Beijing has denied the reports.

India had a military base in Farkhor in Tajikistan, which now hosts only a military hospital (where Northern Alliance leader Ahmed Shah Masood was brought after he was shot by al Qaida assassins), and stakes in an air base at Ayni, the latter thanks to the efforts of A.B. Vajpayee’s defence minister George Fernandes. Though the IAF and Border Roads engineers have since upgraded Ayni to take Sukhoi-30s and MiG-29s, neither the Manmohan Singh nor the Narendra Modi regime has sent any. About 150 IAF personnel are reportedly posted there, taking care of the runway and the control tower for the Tajiks. The base recently hosted a few Air India planes that had gone to lift Indians from Afghanistan.

Whether China actually builds a base in Tajik territory or not, it is clear that another round of the Great Game is afoot. We can’t play it with bare feet. We need spiked boots, unless we are willing to be trampled upon.