Better to have an enemy who slaps you in the face, than a friend who stabs you in the back—so goes an old saying.

Prime Minister Narendra Modi learnt this a year ago. Hardly had he sent back Donald Trump after feting him like a king-emperor in an Ahmedabad stadium, when the old boor turned around and asked Modi for shiploads of Covid-19 drug hydroxychloroquine. If you don’t send the stuff, he threatened mon ami Modi, “there may be retaliation”.

Now it appears, it is not just one ex-prez, but the US as a nation is like that—a boor who bullies buddies. The Pakistanis have known it for a while now and have been quietly unfriending the Americans. Now it is India’s turn to learn. 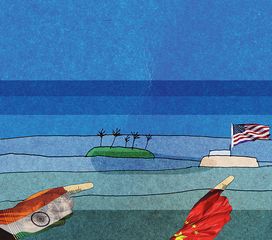 The Yanks had been wooing us as a major non-NATO ally and celebrating us as the world’s largest democracy. A few weeks ago, their newly inaugurated president, Joe Biden, joined Modi, Japanese Prime Minister Yoshihide Suga and Australia’s Scott Morrison, in a Gang of Four (pun intended) to teach the truant Chinese a few lessons in the laws of seafaring.

Seafaring countries had been claiming coastal waters from three to 12 nautical miles (depending on the range of their coastal guns) since the 17th century. By the 20th century, countries found that technology enabled them to fish, mine and drill in deeper waters, and they began to claim more sea acres. Laws, pacts and treaties were slowly evolved—and concluded by the 1990s as the UN Convention for the Law of the Sea (UNCLOS)—by which it was agreed that a coastal state can claim 12 nautical miles as territorial sea, and another 24 miles as a contiguous zone where it can do some policing (such as chasing the Italian marines who shot Indian fishermen a few years ago). A 200-mile stretch was recognised as an exclusive economic zone (EEZ), where the coastal state has monopoly over fishing and mining rights, but is open to foreign merchantmen and men-of-war for free passage.

However, certain states made national laws which stipulate that though foreign ships may pass through their EEZ, the passers-by ought to inform the host state as to what they are up to. India has such a law which, in effect, is aimed at prohibiting the Pakistani or Chinese navy from playing wargames close to our coast.

The US refuses to recognise these national laws, be they China’s ownership claim over stretches of the South China Sea or India’s insistence on being informed prior to passage. To show that it means business, and to our deep embarrassment, the US sent a warship right across our Lakshadweep Sea on April 7. That was a cowboy way of showing the Chinese as to how they punish countries that encroach sea acres.

It appears, Delhi did not choose its friends wisely. When it comes to enforcing the law of the sea, the US is the last country that you can count on. For, the US is a self-declared outlaw, having refused to ratify the UNCLOS, which 168 countries, including India and China, swear by.

Simply put, Uncle Sam is an UNCLOS outlaw. China, legally put and in comparison, is only a violator. So, it is a case of the outlaw asking violators to follow the law!

Tailpiece: Foreign ships had occasionally been spotted surveying Indian maritime zones on the sly. In 2001, THE WEEK had broken the story of how the Indian Navy had spotted the USNS Bowditch surveying the sea 30 miles east of Car Nicobar, and the HMS Scott snooping around 138 miles off Porbandar. India had lodged strong protests with the US and the British missions then, and warned that “such activities will not be permitted in the Indian EEZ”.