Narendra Modi seems to be hell-bent on stealing the Congress’s clothes. Literally so. He has become the brand ambassador of khadi which, Congressmen used to think, was their robe of honour.

Once hailed as the fabric of freedom and the symbol of self-reliance, the coarse cloth had been tucked away for too long in the dusty shelves of khadi bhandars and the cobwebbed corners of the nation’s conscience, with the Congress claiming to be the keepers of both. With political corruption seeping through the fabric of governance over the decades, the cloth had come to be condemned in middle-class imagination as the costume of corrupted power.

Virtuous Gandhians, who continued to wear it thinking that it was a spartan but non-violent battle wear for social and economic justice, were becoming an aberration. And the bleeding-heart NGO types—the ones who cooperate with Gandhians and co-habit with corporates—had long ago switched over to Fabian socialism and Fab-India kurtas.

Now Modi is giving the soiled khadi a bleach-and-starch wash. Himself a khadi-draper bold, he has been spinning yarns about the hand-spun cloth since his first Mann ki Baat in October 2014. In his latest, he told the country how khadi is now being spun and sold in Mexico, thanks to the efforts of Mark Brown, an American. Brown became a Gandhian after watching Richard Attenborough’s Gandhi, lived in the Sabarmati Ashram, learnt to spin and weave, and has imparted the knowledge to about 400 families in Mexico’s Oaxaca (pronounced Oahaakaa). 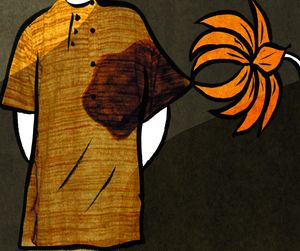 In India, the fabric has remained the same, but Modi has tailored it to suit the new-gen and non-Congress tastes and style. His catchline “khadi for nation and khadi for fashion” is perhaps the most glamorous thing that happened to the humble fabric after Mahatma Gandhi sent a self-spun lace as his wedding gift to Princess Elizabeth in November 1947. (Incidentally, the Queen ‘regifted’ it to Modi when he called on her at the Buckingham Palace two Aprils ago.) Now even catwalkers are wearing khadi, though their requirement is in inches and not yards.

The original icon of Gandhian self-reliance, khadi has also come in handy to promote Modi’s Atmanirbhar Bharat, and is also giving a shot in the arms that are fighting the coronavirus. The Khadi and Village Industries Commission is getting silk and cotton masks stitched in trendy colours, selling them to Central government offices including the president’s and the prime minister’s, and seeking markets in West Asia and Europe. The KVIC claims that these masks, made of double-twisted fabric, retains moisture while providing easy air passage.

Tailpiece: Princess Elizabeth was not the only one who received khadi cloth as a wedding gift from Gandhi. When Jawaharlal’s sister Vijaya Lakshmi was to be married to Ranjit Pandit, the Nehrus were worried that khadi silk could not be dyed in the right wedding colours. Bapu and Kasturba took up this as a challenge and gifted a sari, woven and dyed bright by them.