A Xanadu in new New Delhi

Like Kubla Khan who decreed a pleasure dome in Xanadu, Narendra Modi is decreeing a power dome in Delhi—a brand new capital complex inspired, in all probability, by ancient Indian architecture. Coleridge’s Xanadu was in an opium-induced daydream; Modi’s will be in optimum-spaced Delhi—a steel-and-concrete capital.

Let me get you into the picture. We have this Sir Edwin Lutyens-built Rashtrapati Bhavan atop the Raisina Hill, with North Block and South Block which house the prime minister’s office and the home, finance, defence and foreign ministries standing in attendance. Grand, stately, majestic, and imperial with an imposing equilibrium. 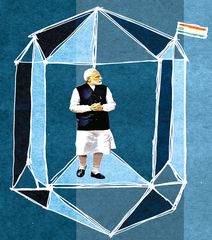 Down the hill, on both sides of the Boat Club lawns, we have these pairs of buildings—Rail Bhavan-Vayu Bhavan, Krishi Bhavan-Udyog Bhavan, Shastri Bhavan-Nirman Bhavan and so on, which house myriad ministries and offices. They, too, add to the equilibrium of Lutyens’ grand plan, much like the salabhanjikas who stood on the sides of Vikramaditya’s throne steps.

The problem is that these buildings, built by the central public works department during our post-Independence penury, are as much of eyesores as they would have been if those salabhanjikas had been vandalised by an iconoclastic Tamerlane. They look more like gargoyles than salabhanjikas.

Modi wants to pull them all down. The Parliament House will stay, but as a museum. The prime minister’s house will move closer to Raisina. Newer buildings will house Parliament and the ministries.

We Indians seem to be obsessed with pulling down and building anew. Other peoples found cities and expand them. Rome was not built in a day; once it was built it was never rebuilt lock, stock, and stone. The Greeks built a new Athens only after the Acropolis got ruined. Moscow, Paris, Vienna and all expanded naturally. London has remained where it is for two millennia, rebuilt once after the Great Fire.

Ask me, I would count more—the Tomaras’ Lal Kot, the Chauhans’ Qila Rai Pithora, the Slaves’ Qutb Complex, Alauddin Khilji’s Siri, Ghiyas-ud-din Tughlaq’s Tughlakabad, Muhammad bin Tughlaq’s Jahanpanah, Feroz Shah’s Ferozabad, Humayun-Sher Shah’s Dinpanah or Shergarh, Shahjehan’s Shahjehanabad, the Civil Lines from where the British ruled from 1912 to 1929, and New Delhi. There are more, if you count forts like Adilabad where, too, sultans lived. And we have not counted Indraprastha.

Delhi has also been abandoned and reoccupied. Muhammad bin Tughlaq force-moved the capital to Daulatabad, Bahlul Lodi to Agra, and Akbar to Fatehpur Sikri.

Modi, thankfully, is not shifting out, but building anew. He wants his Xanadu to be more Indian than any other predecessor cities, but one cannot fathom why Parliament House has to be triangular. The circle is more Indian—Krishna’s discus and Asoka’s dhamma chakra were round.

Tailpiece: Two buildings mar New Delhi’s equilibrium. The Parliament House, standing in the northwest corner of Rajpath, has no pair in the southwest. That is because a legislature was planned only after the 1919 Montagu-Chelmsford Reforms by which time the city plan had been frozen.

The other is Zabta Ganj Masjid on the south of Rajpath, built by the ruthless 18th century Rohilla chief Zabta Khan. (The area where the India Gate stands used to be called Zabta Ganj.) Even while insisting on equilibrium in his design, Lutyens did not want to hurt sentiments by pulling it down.