Older man succeeding younger man? Yes, that is what has happened in the BJP’s presidency. Jagat Prakash Nadda, who was working president and is 59, has succeeded Home Minister Amit Shah who is 55 and certainly was not a non-working president. Shah, if at all, would have been an overworking president.

Age is a non-issue in politics. When it comes to older persons succeeding younger ones, you cannot beat the Congress. The presidency of the grand old party has been passed on from a youthful son to an ailing and ageing mother.

There is no provision for a working president in the BJP’s, or the Congress’s, constitution. It was a “working” arrangement. 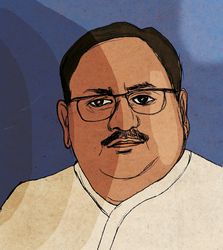 The term “working president” suited Nadda well. His ability to slog is known even to his opponents. A month before his final law exam in Himachal Pradesh University, he had gone to jail for having road-blocked chief minister Virbhadra Singh who was ignoring the demand of a Bilaspur village for a secondary school. From the prison he appeared for 16 of his 20 papers and cleared them all.

Nadda’s anointment on January 20 was a tame affair. No fanfare. There was no other contestant, just like in the Congress most of the time. On the appointed day, Prime Minister Narendra Modi and Shah came to the party office, and spoke nice words about good old Nadda.

Even otherwise, you can rarely get a bad word from anyone in the party about Nadda. He is a nice man to know—learned, well-read and a good gent with no pretensions. Not overwhelming like Shah or Modi. More in the Kushabhau Thakre or Jana Krishnamurthi mould in terms of temper and demeanour, but with a better sense of humour than the two. He can mimic people, and make you laugh as Vice President Venkaiah Naidu does with his alliteration —that is, if he is in a good mood, which he always is.

All the same, few would be envying Nadda on his elevation as the 11th president of the world’s largest party. He does have a tough job ahead.

An immediate challenge would be the Delhi assembly polls. The game was already afoot; he was anointed president on the day before the last date for nomination. Winning Delhi may be a tough call, but Nadda would have to improve on the party’s miserable 2015 tally of three seats in a house of 70. Having engineered the BJP’s Lok Sabha campaign in Uttar Pradesh, he may meet that challenge. Next would be the polls in Bihar, his birth state, where the alliance with the Janata Dal (United) is getting strained.

Nadda’s biggest challenge would be the legacy of his predecessor. Shah had acquired such a larger-than-life image as a modern-day Chanakya that Nadda would find himself dwarfed in comparison.

But Nadda has one great asset. He knows how to keep his mouth shut. Especially about himself. Modi judges you by what you have done; not by what you claim to have done—he once told a colleague of mine.

His long-term challenge would be to ensure that the party remains the largest. Its legislative strength is intact, but its liberal parliamentarianism of the A.B. Vajpayee-L.K. Advani era is giving way to a politics of shock-and-awe and confront-and-combat. The economic downturn and the pursuit of policies of social strife may in the long run dent the party’s appeal.

Tailpiece: The Congress, too, had a working president. When she felt bereft of political aides after the death of son Sanjay Gandhi in a plane crash, Indira Gandhi made veteran Kamalapati Tripathi the working president, but gave him no work. THE WEEK carried a mocking cover story on the arrangement, with a cover picture of the working president relaxing on a sofa with his feet up.