War is too important a matter to be left to the military, said prime minister Georges Clemenceau, who led France to victory in World War I.

A handy quote that can buttress the case for civil supremacy over the military, but the line has been quoted out of shape by babus for keeping the brass hats out of government. By Jove! These mandarins who cannot tell a mortar from a machine-gun have been advising ministers on all matters military!

Now Narendra Modi has restored the brass hats some shine. He has got them a chief of defence staff who will play four roles—give single-point military advice to the government, administer (not command) the nuclear forces, coordinate among the services and prioritise their plans, and ensure jointness in their planning, training and operation. No troops for him to command. 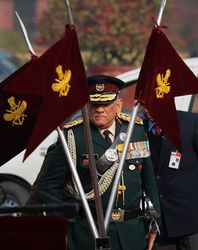 He will hold a four-star rank as the three chiefs do, and chair their meetings as first among equals. He will wear his parent service uniform, but his buttons, belt buckle and peak cap will bear the triservice crest which depicts the Army’s sword, the Navy’s anchor and the Air Force’s eagle. The shoulder patch will be maroon, and it will sport the Asoka lion and a triservice crest instead of the star and sword-and-baton badge. He will be driven in a car bearing four stars and a maroon triservice flag. He will work in South Block, live in 3 Kamaraj Marg, which very likely will be christened Defence House, and leave in three years with a good pension.

Jolly good, but it looks like more thought has gone into matters of pay, perks, patches and paraphernalia than into how he will work.

The government says he will enjoy a first-among-equals status among the chiefs, almost at par with the cabinet secretary and above the defence secretary, who is below the three chiefs.

Till now the defence ministry had four departments, each one lorded over by a secretary—the defence department under the defence secretary, defence production under another secretary, ex-servicemen’s welfare under a third secretary, and R&D under the DRDO chief. Now, a fifth department, called military affairs, has been decreed for the CDS to lord over.

Therein lies the anomaly. Among the secretaries, the defence secretary had been notionally a notch above the others, and he had been giving holistic advice, whatever its worth, to the ministry on all defence matters. He will continue to do that, and the CDS will confine himself to matters military. But then, if military comes under defence, wouldn’t the military adviser come under the defence adviser?

Capital acquisition (read big arms buys) will continue to be under defence, but revenue acquisition (small pieces including ammunition) under military affairs. Which means, the defence secretary will buy the cannons; the big chief will buy the shells. Ha!

Wasn’t there a simple way out? Couldn’t they have made the chief of integrated staff, a three-star officer who has been in place for the last two decades, the head of military affairs?

Perhaps the babus, who make the rules, didn’t want it that way.

Tailpiece: When the Anglo-Sikh war broke out in 1845, governor-general Henry Hardinge, still an enlisted soldier, couldn’t resist the temptation of being in the field. But commander-in-chief Sir Hugh Gough said having him around would create problems of command since Hardinge was his senior in army rank and in the government.

Hardinge happily waived his right to the supreme command, and served as second-in-command under Gough. Needless to say, the duo won the war.