To Siachen, with selfie-sticks

Soldiers in Siachen may soon get company. Defence Minister Rajnath Singh has plans to open the stretch from Base Camp to Kumar Post for tourists.

Think of this. Soldiers, freezing in the cold and feeling lonely at the top, being asked to pose for selfies with tourists. Cool!

For those who ascended late... 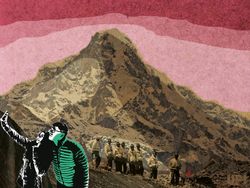 Siachen had been unchartered territory till the 1980s. The icy heights had been left unmarked in the Line of Control maps agreed between India and Pakistan after the 1971 war. We had assumed that the lands further to the north, along with all the ice on the rocks, would be ours. Cheers!

One day in the early 1980s, climber Col Narendra (Bull) Kumar came across a few US-made maps in the hands of a European climber. The maps showed Siachen as Pakistani territory, and Kumar learnt that Pakistan had been issuing climbing permits to the glacier. Then came a spy report that Pakistan had ordered a few thousand snow boots from an Austrian company. A scout by Kumar and co found Pakistani cigarette butts and other litter on the hills, suggesting that Pakistanis had been frequenting the place.

Alarms bells rang in the Army HQ and in the PMO when the jigsaw pieces of the maps, boots and butts were put in place: Pakistan could be planning to annex the glacier. Indira Gandhi ordered a preemptive operation, and a full brigade with hardly any snow gear landed on the Saltoro Heights which overlook the glacier. The boys have since been sitting there like a Humpty Dumpty who doesn’t fall off the wall. All the Pak cannons and all the Pak men have not yet knocked them down.

Pretty peeved, the Pakistanis fretted, fumed, frothed and fired. The firing stopped with a deal in 2003. Today, there is no enemy to worry about but winter and rough weather, both of which, too, used to kill troopers till George Fernandes and A.K. Antony sent them snow-scooters, better tents, jackets, boots, pumped-up kerosine, hot meals and even chocolates.

Peaceniks in both countries and elsewhere think that Siachen is the lowest-hanging fruit among the issues between the two neighbours. There is no historical baggage, no emotional dimension, no civilians involved, no political issue, no resources—so goes the argument.

They are deluding themselves. The issue has been talked over several times, but the talks have got nowhere. Pakistan wants India to vacate the heights; India says it will if Pakistan recognises the positions where India has been sitting. Neither is willing to budge an inch. What the peaceniks ignore is a basic fact of military history: No country gives up territory willingly.

Moreover, Siachen is not just a barren land with a glacier. The region and its nearabouts are the headwaters of several subcontinental rivers. And the whole territory, sandwiched between Pakistan-held Baltistan and Chinese-occupied Shaksgam Valley, is of great strategic value.

The tourism idea also may trigger an avalanche of protests from the green lobby. As it is, the glaciers are melting with the globe getting warmer. Secondly, Siachen and its nearabouts are already getting filthy with more than 30,000 soldiers living there. Wouldn’t tourists, however few, add to the litter?