Off with the guard & other SPG tales

The Special Protection Group will now have one VVIP less to guard. The home ministry has cut Manmohan Singh off the SPG’s charge. He will now be guarded by the CRPF in Z+ category, much like Mukesh Ambani but with one difference. The tycoon pays for his security; the taxpayer pays for Manmohan’s and other VIPs’. 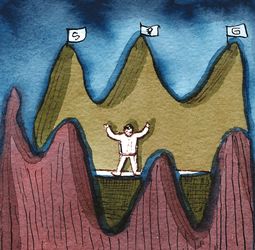 Narendra Modi’s security czars have been scaling down the security cover associated with our VIP culture. They have banned beacons from most car-roofs, and cut the number of cops on guard duty. Manmohan, quiet soul, has no complaints. His daughters had themselves cut the SPG tail long ago. He had never asked for security for prestige, nor asked it to be withdrawn for publicity. V.P. Singh used to make a hue and cry in the 1990s, seeking to be “freed” from SPG cover. The law then was that you had to be guarded, tailed, covered and secured by the SPG for ten years after ceasing to be prime minister; no way you could shake them off.

The SPG was raised following Indira Gandhi’s assassination through an executive order (statutory status came in 1988) during the Rajiv Gandhi era, originally for guarding incumbent prime ministers and their kin. Thus Rajiv, though facing threat from Lankan Tigers, had no SPG cover after he demitted office. He roamed the badlands with just two cops; sadly, one was killed with him in the blast at Sriperumbudur where he was campaigning in the 1991 polls. Ironically, the election itself was caused by two constables. Read the tailpiece.

P.V. Narasimha Rao got the law amended so as to cover former prime ministers and their close kin for ten years from the day they quit office. That saved him, in less than five months of demitting office, from the embarrassment of walking into Delhi’s trial courts as an accused in a cheating case. On a plea by the Delhi Police that they could not secure the crowded court complex which was teeming with criminals, constables, clients, court clerks, and lawyers, the Supreme Court ordered that the trial be moved to Vigyan Bhavan, a stately venue for international events.

That order, by Justices M.M. Punchhi and K.T. Thomas, had some interesting observations about the relationship between a guard and his charge under the SPG Act. The SPG, the court said, would have to guard him, even if he were sent to prison. Though the order did not say so, it was interpreted that if a protectee were to be sent to the gallows, the SPG would have to guard him till the hangman’s knot tightens on him. “...[T]he protectee is a protectee all the time, as long as he keeps breathing...,” said the court.

A.B. Vajpayee got the Act amended again. He scaled down ex-prime ministers’ cover to one year, but renewable every year if intelligence agencies saw danger. With that went the SPG cover of H.D. Deve Gowda, I.K. Gujral and their kin. But the home ministry continues to see threat to Sonia Gandhi, Rahul Gandhi and Priyanka Gandhi enough to warrant SPG cover.

Tailpiece: In 1990-1991 Chandra Shekhar was reigning as prime minister with outside support of the Congress, after V.P. Singh had resigned. One day, Congress workers caught two strangers lurking around Rajiv’s home. They claimed to be Haryana cops sent to guard him, but the Congress alleged that they were the regime’s spies snooping into their leader’s home, and pulled down the government.