Modi's approach towards China appears to be matured now

Listen to what he told the opposition: Your words will matter more than your numbers. Pretty Nehruvian! As Rajni Kothari once observed, Nehru gave the opposition more respect than their numbers commanded.

Modi’s foreign policy, too, is getting circumspect. The rough edges are getting polished. In 2014, he had got the Tibetan ‘prime minister’ and Taiwan’s mission head to his swearing-in. The sight of the two T-chiefs was red rags to the Chinese. Ties with China swung like a pendulum, from a dhokla lunch with Xi Jinping on the Sabarmati banks to a military standoff on the Doklam plateau. It needed much delicate diplomacy at Wuhan to avert a showdown. 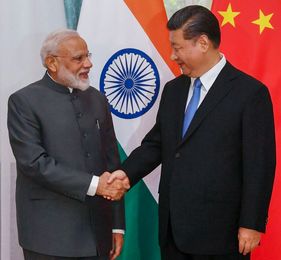 Photo Modi and XI at The Shanghai Cooperation Organisation Summit in Bishkek, Kyrgyzstan/PTI

Modi does not look inclined to taking such risks this time. His approach appears to have matured. With a former career diplomat as his foreign minister—an old China hand to boot—we may now see quite a lot of nimble-footing with the Chinese.

We had a glimpse of it at Bishkek, Kyrgyzstan. Modi met the rest of the Shanghai gang there, who were all praise for the Second Belt and Road Forum that Xi had hosted in April. Not Modi. He agreed with Xi and the rest on other issues—ending the dollar reign, denial of market access, and such other, but kept away from the chorus of praise over the Belt and the Road.

Modi also did a bit of diplomatic plainspeak (pardon the oxymoron; diplomats cannot speak plain English). Connectivity projects, he told Xi, should be “transparent” and “inclusive”, and should respect the “territorial integrity” of others. He meant two things. One, Xi should not get his poorer neighbours, who live on the sides of the Belt and the Road, into debt traps by making them sign contracts whose terms and conditions are in small print. Two, Xi should not build roads, bridges, factories and power lines for Pakistan on territory that is India’s.

The Chinese, too, seem to be getting off the high Mongol horse which they have been riding down the Belt and the Road. ‘Inclusive growth’, they are finding out, cannot happen if it excludes India.

‘Inclusive growth’ was the overarching theme of the Second China-South Asia Cooperation Forum held last week in Yuxi City in Yunnan Province, where this columnist, too, was invited to speak. Once a hub of the southern Silk Route, Yunnan is emerging as the hub of the Belt and the Road to south and southeast Asia. It is linked, or getting linked, by road to Vietnam, Myanmar, Laos and even Kolkata, by rail to the entire Eurasian landmass, by waterways to Laos, Myanmar and Thailand, with gas pipelines to Myanmar, Laos and Vietnam, and through data lines to India, Sri Lanka and Bangladesh.

Xi has four sub-projects for South Asia—a Bangladesh-China-India-Myanmar economic corridor, a maritime Silk Road across China, Bangladesh, Sri Lanka and the Maldives, a trans-Himalayan corridor linking China, Nepal, Bhutan, India and into the Indian Ocean, and the China-Pakistan Economic Corridor. Which ones have a chance for getting India’s nod? No prizes for guessing.

Tailpiece: Fiction-writers often borrow real place names for their work. But Yunnan province has a place which has borrowed its name from fiction. Claiming that James Hilton’s 1933 novel Lost Horizon, which talked of an imaginary land called Shangri-La, was inspired by Zhongdian in Yunnan, the Chinese have renamed the county as Shangri-La, just to attract tourists.

That is like naming a real town in Karnataka as Malgudi. Any ideas, Kumaraswamy?