When Jerusalem called on Mukteshwar

A curious case of vaccine maitri and bureaucratic verve

It was October 1945. World War II had just ended. Atomic weapons had been deployed for the first time in history. Millions of lives had been lost, millions more disrupted. The world was trying to rise to its feet from the rubble; men and women were getting on with the business of survival, attending to the living details of the job at hand.

This may well have been the thinking of the chief veterinary officer in British-mandate Jerusalem, whose note on October 29 starts a slim file that came to hand in the archives. He reported to the director of the agriculture and fisheries department that the chicken population of Palestine was being ravaged by Newcastle disease. While the vet service had been preoccupied with African horse-sickness, about 3,00,000 birds had died in nearly 200 outbreaks. One direct consequence of the shortage of birds was the exponential rise in the price of eggs to 35 mils each; the mil, I find, was 1/1,000 of a Palestine pound. The only hope lay in India, where a vaccine against Newcastle disease had been used with some success. 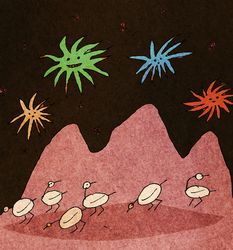 The wheels of bureaucracy began to turn. The Jerusalem department contacted the Imperial Veterinary Institute at Mukteshwar, already a renowned research centre and production hub for animal vaccines and sera; its cold climate at 7,600ft was ideal for the vaccines and its remote location, surrounded by hundreds of acres of pine and oak, was a natural quarantine zone for infected animals. Its response to Jerusalem’s request for vaccines was positive, but air transport and refrigeration would be essential to guarantee the vaccine’s efficacy.

The wheels picked up speed. Sanction was accorded for purchasing 20,000 doses. The director reported to the chief secretary that ordinary temperatures would have “rapidly lethal effects” on the vaccine and that it would be essential to maintain the correct conditions throughout the journey. Further, he underlined that the “preparation of this vaccine is no simple matter owing to the marked differences which various strains exhibit”; incorrect handling could lead to “paradoxical results”. It was necessary to “study this problem at first hand and to obtain all particulars concerning the peculiarities of the vaccine from the research workers experienced in its preparation and use”. It was therefore necessary that two representatives of the veterinary service proceed to India and monitor the entire process.

The machinery was by then whirring in top gear. The government of India was wired for grant of visas. Even as approval was awaited, the file was moved back to the chief secretary for grant of “high priority air passages” on the British Overseas Airways, a certain Priority 3 being recommended. Transit visas for Iraq were obtained from the Iraqi consul in Jerusalem, presumably to cover a transit halt. On November 23, just about three weeks after the initial note, the two selected gentlemen—a certain Mr H.R. Binns, senior veterinary officer, and Dr A. Komarov, poultry disease officer, were winging their way joyfully from the hard-bitten Judean hills to salubrious Mukteshwar for a three-week stay.

The file goes silent thereafter and it is not known if the 20,000 doses of vaccine ever reached Palestine, or with what success. Given the easy availability of chicken shawarma and shakshuka in present-day Jerusalem, Newcastle disease was obviously overcome. But the file does confirm that certain things—the love of chickens and omelettes, our Vaccine Maitri and the need for delegations to go abroad to study problems—are not new. And that any bureaucracy can act fast when it wants, especially if foreign trips are involved.