How and why Japan wants its youth to booze more

Alcohol taxes have now plummeted to 1.7 per cent in Japan

Should five per cent appear too small/ Be thankful I don’t take it all… said the taxman in the famous Beatles number. But then there is the nicer kind of taxman, too, and he is in Japan.

Of late, he has been staring at the falling graph of taxes collected on alcohol and scratching his head a lot, a practice that usually indicates a state of advanced befuddlement. From 5 per cent of revenue in 1980, alcohol taxes have now plummeted to 1.7 per cent. Where, he wonders, after a particularly vigorous scratch of the old cranium, have all the real Japanese men gone…. All those who used to go to office in the morning largely driven by the thought that after work they would go to their favourite beer bar, not for getting sozzled but for some wholesome nomikai. This time-tested practice of raising a glass—or two, or three—of beer or sake with colleagues helped to lubricate bonding and break down barriers between managers and staff in a traditionally hierarchical society. 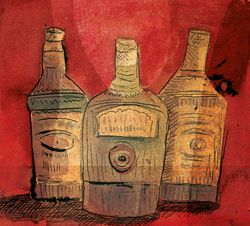 The taxman shook his head in despair and reached for his third cup of sake. He consoled himself that it wasn’t anybody’s fault; the earth rotates, things change, they just didn’t make them like that anymore. In fact, they are making fewer and fewer: the number of baby births in Japan in 2021 is the lowest since record-keeping began in 1899. Of these few, at least 50 per cent have developed bad habits: they don’t take even one drink a day. Perhaps it’s the drunk driving law that’s keeping the boys away from the booze; anything exceeding zero per cent alcohol in your bloodstream can set you back about 8,000 dollars and have you admiring the interior decoration of a prison for five years. The booze companies responded with zero per cent beer. Put that back in the horse, the tipplers said, and even the taxman, being essentially fair-minded, couldn’t disagree. New-fangled theories about alcohol and health did further damage. The coup de grace was delivered by the pandemic and work-from-home culture.

Another graph showed that fewer Japanese were getting married. The taxman, now well down in his cups, nodded understandingly; he could see the connection to not being under the influence. They were also living longer: what with all the fish, Japan was the super-aged society of the world. The country had more centenarians—about 86,500, not to put too fine a point on it—than centurions in Test cricket. These centenarians deserved respect, thought the taxman, but you could hardly expect them to go bar-hopping.

Finally, with the fourth cup, came the epiphany. To catch a thief, set a thief; use young people to bring young people back to the bottle. Soon the National Tax Agency of Japan had launched the Sake Viva! campaign. A competition, open to all those between 20 and 39, is seeking proposals to revive the popularity of alcohol among the youth. Sales methods that explore the use of artificial intelligence and the Metaverse are encouraged, thus ruling out fuddy-duddies. The agency has also launched a Japan Wine Fun website and organised a wine fair and an online craft beer festival. All this augurs well for the return of the young to the watering holes and the return of the smiles to the taxman’s face.

Meanwhile, in Delhi, my local theka has pulled down the shutters owing to some brouhaha about the excise policy and I have to schlep all the way to Gurugram to get a decent bottle of Chilean red. One is tempted to distort Wordsworth and say: Bliss was it to be in Japan/ And to be young was very heaven.