Remembering the Poles who received kindness from India during WWII

Every major calamity, be it a war, a pandemic, or a natural disaster hides within its folds a thousand human stories of suffering, courage, sacrifice, even love. As I watch the visuals of Indian students caught in the Russia-Ukraine crossfire, the rush at border crossings, the joyous scenes of return through Poland and other points, I wonder how long it will take for these stories to filter through in writing, in films, art and personal memories.

For inevitably, these memories will have marked these students forever and will live on. Like the stay in India during World War II lives on in the hearts of the “Children of Jamnagar”, whom I first met at the Indo-Polish Cultural Friendship Society in Warsaw in 1985. That society, with its 40 odd branches across Poland, was the hub of our cultural relations in those pre-perestroika days. Here, India lovers discoursed in Indian languages, performed classical Indian dance, recited translations of Tagore, and painted Indian motifs. This was Indian soft power at its most effective— subterranean, unpolitical, homegrown—that needed only an occasional nudge from us. 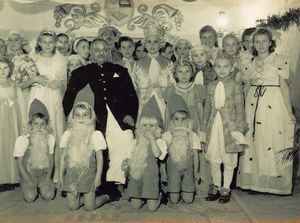 The Children of Jamnagar formed a club under this society; its greying, middle-aged members talked of their childhood years in a corner of India with a soft, affectionate look in their eyes. Clutching albums with fading black-and-white photographs, they were on a mission to keep their story alive, the story of how they ended up near Jamnagar, as guests of the Jam Sahib Digvijaysinhji, the princely ruler of Nawanagar, and a successor to Ranjitsinhji or Ranji, the famous cricketer.

The full story needed some digging. After Poland was parcelled off between Hitler’s Germany and the Soviet Union, immense tragedies unfolded, including the well-documented Jewish holocaust and not so well-documented deportations of nearly two million Poles (as well as Ukrainians, Lithuanians and Jews) to the Soviet gulags.

Countless died unrecorded deaths, including thousands of Polish military officials and intellectuals who were massacred in the Katyn forest. Only after Hitler attacked the Soviet Union was an amnesty declared for Polish internees and the Polish army began to regroup under General Wladyslaw Anders. Thousands of Poles—civilians, women and even orphaned children—were left to fend for themselves in the Soviet Union. It was difficult to find homes for them in other countries, and it took a huge effort from various quarters to somehow move a large number to camps in India over the next two years.

Five hundred of these orphaned children, hungry, sick and cold, had managed to reach Ashgabat. They were shuttled in six trucks driven by Sikh drivers to Mashhad in Iran and then into India. They ended up at Balachadi near Jamnagar—offered as a campsite by the Jam Sahib, following an approach from the British government to princely states. Another large camp was established at Valivade, Kolhapur.

At Balachadi, the children were given a home, treated for diseases and educated. Efforts were made to keep up Polish culture, including through regular musical concerts. The Children of Jamnagar would carry with them forever their memories of life in camp and of the warm welcome they received. As a thanksgiving, they decided to install a huge plaque on the school wall in Balachadi in 1989. The plaque showed a mother sheltering a child, and the inscription in Polish and Hindi paid homage to the beloved land of Jamnagar; I recall going to the Warsaw factory to check the Devanagari lettering. Soon after, a private school in Warsaw was named after Jam Sahib.