The land of the five rivers is on the verge of desertification, says Navtej Sarna

Arvind Kejriwal was recently interviewed by three anchors on a discussion platform regarding his party’s political aspirations in Punjab. The first questioner wondered how he could handle a state which was all about gidda, bhangra and butter chicken. The second interviewer, sensing this to be a good tack, questioned Kejriwal’s chances as he was not a non-vegetarian, did not take a peg—as she put it—and did not perform bhangra.

Kejriwal’s responses, however scintillating, need not detain us here, but the lazy intellectual framework of the questions deserves a moment. Every profession is entitled to its lazy quota but when prime time TV rolls out unchecked stereotypes into millions of living rooms, the damage can be greater. A little digging on Google would have thrown up the National Family Health Survey of 2015-16 which shows that Punjab ranks the lowest in meat-eating across India with only four per cent of the women and 10 per cent of the men consuming any meat even once a week; corresponding figures for Kerala are in the nineties. It might have helped convince the anchors that all Punjabis are not in a permanent bhangra frenzy, with a Patiala peg in one hand and a chicken leg in the other.

What saddens me is that Punjab has brought this upon itself. If proof were needed of that, it was provided by the current chief minister himself on the same platform the next day. He ascended the stage performing bhangra moves accompanied by four dancers in full dance regalia; being consistent, he departed in the same manner. After that how does one blame any interviewer for rubbing in stereotypes?

Do not get me wrong. I am all for the occasional Sardar joke myself; the ability to laugh at oneself shows an inner confidence, a certain resilience. If the picture is broadly rosy, then a touch of the proverbial Punjabi humour, heartiness and devil-may-care attitude serves to heighten the blush. But when Punjab has become a caricature of its storied self, as at present, then the “butter chicken” remarks only leave a rancid taste. 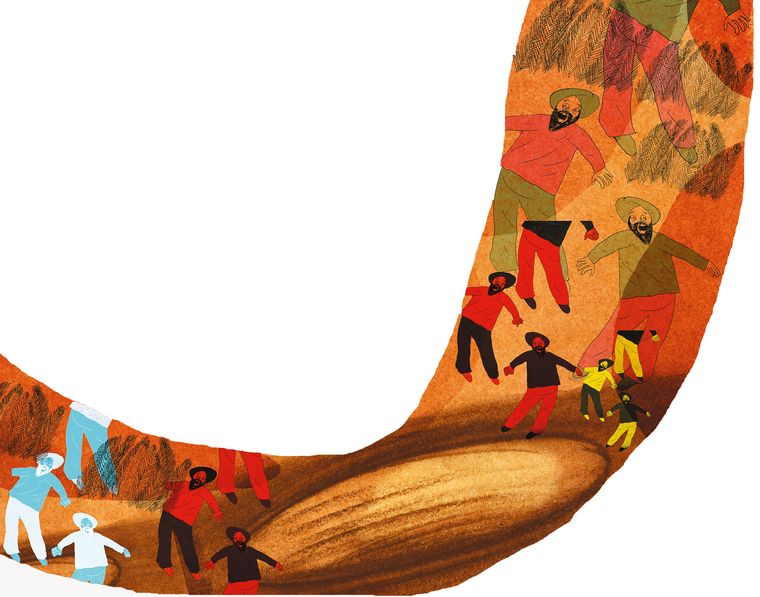 Our politics has become comically absurd to the extent that newspapers can actually dispense with the obligatory front-page cartoon. Once the thriving breadbasket of the country, the home of the famed Green Revolution, the land of the five rivers is today on the verge of desertification. Indiscriminate paddy cultivation has drained the water table to desperate levels; 80 per cent of the water is pumped by electricity guzzling tube wells. The once mighty Sutlej—when it has any water—stinks and froths with industrial waste; uranium levels in the soil are far and beyond acceptable levels. Industry struggles to go beyond the hosiery, agro-processing and cycle parts trap. Nobody boasts of a start-up culture, nobody talks up a sparkling cybercity. The most popular educational institutes are the ones that teach you how to get a Canadian visa. Buses ply on routes marked Hoshiarpur-Canada, flying out the State’s future; while Haryana makes great cheese in Bahadurgarh, Punjabi boys take pride in doing the same in Italy. The overwhelming percentage of the youth that is not abroad is in a state of drugged stupor or gyrating on screens, or both.

Justifications are aplenty: drugs come from across the border, Centre-state relations have been unfair to Punjab, years of militancy and security crackdowns have broken the social fabric, migrations are inevitable if jobs and landholdings contract….There may be something in all that, but the undeniable truth is that decades of mis-governance, vested interests and high-level corruption, gross apathy and neglect have hollowed out Punjab. After the partition and the trifurcation, a slow-motion suicide of the remainder is now in progress.

I am often blamed for living too much in the past. Perhaps I dwell too much on the Punjab of the Sikh Gurus, of Sheikh Farid, of Bulleh Shah. Or on Ranjit Singh’s Punjab that held the British and Afghans at bay; or the Punjab of freedom fighters; or the Punjab that continues to give the flower of its youth time and again to defend India’s borders. Just the thought of that Punjab, of its fields and rivers, its warriors and beauties, its ballads and battles would make the head lift, the heart throb. But perhaps that Punjab no longer exists: it is only an idea that cannot stand daylight. The fact is that Punjab has lost pride in itself. We have traded in our glorious past at a discount for the instant thrill of achieving a ‘London thumakda’ or selling tandoori delights on High Street. Barring a miraculous turnaround, Punjab, as Amandeep Sandhu says in his passionate eponymous work, will remain, “a hole in my heart that I want to fill”.