The fall and rise of designer Manish Arora

If he can figure out how to manage his finances, he can be back in the game

Just as we were recouping from Covid-19’s first assault, The New York Times broke a story that no one saw coming: ‘Indian Designer Manish Arora’s Downfall’. It was an investigative piece (also known as an ‘insider leak’, in fashion parlance) on the manner in which the inventive fashion designer ran his company—by spending much on marketing himself and not paying employees and vendors instead.

The long-form piece on India’s most celebrated designer—yes, he was bigger than Sabyasachi, too, with international collaborations with Nespresso, Mac, Swarovski, Reebok, Swatch and many others—came like a lightning bolt. Arora was an Indian fashion god. He had been showing at Paris Fashion Week regularly since 2007 and even fronted Paco Rabanne. I had attended his first show in Paris. The decor was by none other than artist Subodh Gupta. Steel utensils hung from the ceiling, and models sashayed by in pinks and golds and hallucinogenic colours.

“But Mr Arora’s brand partnerships, it turns out, seem to be more like belated attempts to save a business beset by years of chaos and financial troubles than an indication of success,” stated the NYT expose. “And his messy downfall has also been particularly disappointing for those who had hoped he would help bring international attention to the quieter but vital layers of the Indian fashion industry—like the anonymous artisans (called karigars) who are responsible for much of the meticulous and beautiful handwork that goes into the garments.” 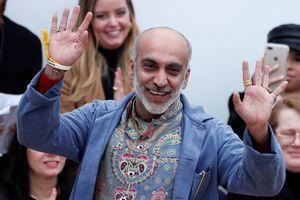 Huh? Which Indian company—right from the richest to the smallest—does not make a profit off the exploited poor? India’s giant population provides nothing if not cheap labour for those with privilege or power to profit from. This is not writing off Arora’s unpaid wages. It is in fact a lesson to us all, that paying poorly does not fly in the western world. And for anyone to be a truly respected international brand, business ethics are paramount.

But, is the resurrection of Manish Arora imminent?

The NYT piece silenced Arora for months. His phone was switched off, his social media frozen, and I certainly thought that it was the end of Indian fashion’s most dazzling era.

In 2021, he stepped out to cook for refugees in Paris along with Chanel’s former India rep, Marielou Phillips. He then released a pink (what else?) cookbook of family recipes. In May 2022, he took part in London’s Kornit Fashion Week and spoke on diversity. He dressed Abba for a world concert, along with forever geniuses Dolce & Gabbana. He hosted a live talk with queer poet and activist Alok Vaid-Menon. Mindy from Emily in Paris wore one of his jackets in the popular show. He turned 50.

At 50, one would think that Arora had done it all and seen it all. But it seems his resurgence is here. If he can figure out how to manage his finances and listen to his CEO, Arora can be back in the game.

Once, in an interview with me, he dissed designers who were successful. “I don’t understand this Rs100-crore business,” he said. “Fashion is about building a brand and an identity. I look at the newspapers in India and everyone’s clothes look alike. But my friends’ kids can recognise my clothes.”

And there’s something to be said about that.