My mother's saris tie me to her, her culture and her roots

After her passing, Indian textiles and Kutch crafts mean so much more to me

I don’t remember ever bemoaning the end of a year as I have 2022. I think it has been quite the annus horribilis. The Russia-Ukraine war has plunged the world into economic gloom, especially at a time when it was struggling to come out of a brutal pandemic. Rising fuel costs, inflation, joblessness, climate change-induced weather fluctuations, women’s rights struggles in Iran and Afghanistan—the world has really been challenged, stretched, torn, beaten and exhausted this year. While everyone seems to be waiting to ring in the New Year, I am having trouble letting go.

I lost my mother this year. I am afraid I will be expected to stop grieving soon, because in 2023 she would have died the previous year. I had her with me in January and February of 2022, and I won’t have her in any month from 2023 onwards. It is childlike, and I feel like I am holding on to the tail-end of her sari pallu while she has already moved on to the next room. But there does not seem to be a right time to let go. 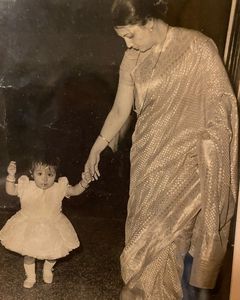 Every New Year, for over a decade, I have resolved to wear more saris. I never got to wearing more than two one year, and went by a couple of years without wearing a sari even once. Mother adored her saris; she wore them often when she was younger, and then would always pull out her brightest and shiniest ones for festive occasions in her later years. This year, I have worn a sari at every formal occasion I have been to, oftentimes wearing her gorgeous drapes.

She has left behind four armoires and as many cabinets brimming over with clothes. There are so many treasures here—cotton bandhanis soft as clouds, silken patolas dancing in the evening light, vivid Banarasis galore, Kutchi resham embroidered lehengas, old zardozi cholis with mirror work, and that one black silk khadi sari I had bought her from Kolkata (she loathed black saris, and wore this one only because it was a gift from me).

Indian textiles and Kutch crafts mean so much more to me now. They tie me to her, her culture and her roots. There was also so much casual everyday wear that I could not possibly use and was not ready to discard. I was only too happy to learn of a trust that donated nicer items of clothing to working women from low-income households. I cannot imagine anyone else my mother would like to support more than women who earned their own bread.

Despite her many privileges, my mother had a few unfortunate knocks in life that shaped her to be the strong, independent feminist she was. Her greatest gift to me was putting her foot down and not letting her in-laws marry me off at 18, as girls in business families at the time were destined to do. Mother—who went to a vernacular school and was so proud of my convent school-accented English—insisted I graduate from college and work at least a year before being packed off in an arranged marriage.

It is thanks to her the arranged marriage did not take place, instead a half-decent career did. And it is because of her that I wear saris with so much love today.