After pandemic pyjamas and athleisure, sexy is back in fashion

Sexy today is about feeling sexy from within

This week belongs to Deepika Padukone. Scratch that, December belongs to Deepika Padukone. What has she done to deserve that? She has released two swimsuit pictures from her upcoming release, Pathaan, and sent temperatures soaring in this cold, cold month. Padukone sizzles in a gold monokini and a yellow bikini, reminding us that it is always hot around her, regardless of the season. Heck, she is totally forgiven for that hideous, outdated and oversized pink pantsuit she wore to a Cirkus promo last week.

Perhaps it would be fair to say that bringing sexy back is becoming the fashion world’s mantra this season. Being sexy has been ‘uncool’ and obsolete for too long now. Pandemic pyjamas and athleisure have turned us into sloppy comfort-seekers. But lately, sexy is sexy once more.

Check out Kiara Advani’s fleet of corset dresses—from the ones in Karan Johar’s talk show and her new song with Vicky Kaushal to a fun denim Versace corset top on a red carpet recently—the young star’s posh and polished style is the perfect mood-board. 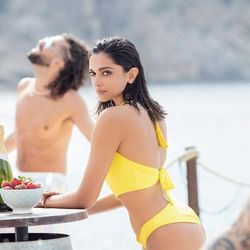 In Malaika Arora’s reality show—the just-dropped Moving In With Malaika—the model, entrepreneur and reality-show judge does a standup act in a furry coat, which she promptly drops to reveal a latex bra top (this is Malla after all). There are constant references to her boobs and her booty through the act, and honestly, she just quells all her trolls and all her pain with such amazing swagger that you cannot but cheer for her.

How about the show du jour—the fabulously written White Lotus, on Disney+ Hotstar? The amount of nipple show in the series, under a T-shirt or then just bare-backed, only adds to the story’s contemporary currency. Both Portia and Harper, the ‘unpretty’ girls on the show, go bra-less under their blouses. While the ‘pretty’ ones—Daphne and Lucia—are all lace and sheers all along.

It is almost as if the focus on the breast has taken on epic proportions. Crop tops with a bra peeping from under, bralettes instead of T-shirts and sheer tops showing off bras are all utterly trendy right now. According to fashion search engine Tagwalk, almost 60 per cent of international fashion weeks this year showed visible lingerie.

The bra has returned to our wardrobes in its painful-but-provocative underwired avatar. At the UK’s John Lewis, sales of underwired bras are up by 45 per cent, while bras without wires are down by 33 per cent, according to a recent article in The Guardian. It further reports that Kim Kardashian’s brand, Skims, has just launched an underwired alternative to its signature seamless styles.

The bra had become a symbol of the pandemic work-from-home culture. Zoom calls from the dining table could easily be handled with a soft bralette or a comfy jersey bra. The return to the push-up is as much a part of ‘revenge dressing’ as it is of ‘revenge partying’.

But are we returning to the same strictures we loathe the fashion world for? Is being fashionable going back to being reed-thin, blow-dried and pasty-skinned again? I think not. The new sexy comes with a new set of rules. When once you made yourself up for others, now you dress up for yourself. ‘Sexy’ today is not about a people-pleasing dress size; it is about feeling sexy from within and letting ‘that’ show in what you put on.