One always expects a good fashion company to shock and awe, but other than the magazine WWD that broke the news, nobody expected the ouster of Gucci’s frontman Alessandro Michele. He has been fashion’s darling ever since he was appointed creative head at Gucci, breathing new life into the jaded Italian luxury label, but also instigating a massive cultural moment across the world.

It is almost as if we will discuss fashion as ‘Before Michele’ and ‘After Michele’; so immense was his influence on the industry and the world’s cultural conversations. Michele took the reins at the storied Italian house in 2015, transforming its fortunes overnight. The new Gucci saw revenues triple from €3.9 billion in 2015 to €9.7 billion in just six years. Often, Gucci had announced that its quarterly growth rates had approached 50 per cent.

Michele remains the greatest designer of our times, thanks to initiating a language that was inclusive of gender (he famously showed his menswear and womenswear together) and sexuality. Gucci was not a refined aesthetic anymore; it turned into a vintage flea market with eye-boggling prints, hallucinogenic colours, bugs as brooches, eyewear, gold chain stacks, nets and fur trims—often all in one outfit. Ranveer Singh paid tribute to Michele by dressing up as him in an Instagram promotion for Gucci last year. 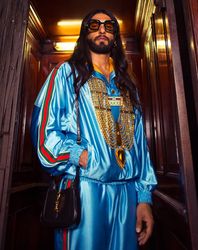 Michele spent seven years as its creative director after having joined Gucci as an accessories designer in 2002. He was completely unknown to the outside world until he was announced as the brand’s new chief designer, and was given free rein of the products, the store designs and the campaigns, too.

The pandemic has been brutal to several brands, but the high-end luxury market has been largely recession-proof. Kering, the conglomerate that owns Gucci, reported a revenue growth of 23 per cent. LVMH reported a growth of 28 per cent, and Burberry saw an 11 per cent increase.

Kering has been known to be ruthless. In 2004, it famously shunted out its golden goose, Tom Ford, and business head, Domenico De Sole. Last year, it removed Daniel Lee after a successful three years at Bottega Veneta, a smaller Italian label it owns. Other brands have seen migrations too. Burberry removed Riccardo Tisci (and replaced him with Lee). Raf Simons closed down his own independent label, even as he continues to head Prada.

But if it ain’t broke, why fix it?

The fashion world is doing exactly what it claims: Pushing change to push numbers. All this talk about sustainability—slowing down production cycles, encouraging customers to make expensive investment purchases and building loyalty between brands and customers—suddenly seems bogus. What brands really want to do is make sure that customers keep spending endlessly and mindlessly on their products. “But when it is change for change’s sake, or change for shopping’s sake, or change for analysts’ sake, which is change for investors’ sake, it simply reinforces the bad habits we’ve gotten into,” writes Vanessa Friedman in The New York Times.

The fashion industry survives on rampant consumerism; its existence is dependent on shoppers coming back for more. The only question our tired, overburdened-with-waste planet is asking: How much is enough?