She inherited her love for handloom saris from Indira Gandhi

What a delight it was to see Congress leader Sonia Gandhi join her son Rahul for the ‘Bharat Jodo Yatra’. Rahul was in Mandya district of the BJP-governed Karnataka on the 27th day of his padyatra across India. His inter-state walk and his daily photo updates with youth and students from across the south, have captured the nation’s attention. But his mother showing up—the only Indian politician to have ever refused prime ministership—was a golden moment. More so, since Sonia Gandhi was seen in public after a long hiatus because of her ill-health. Also because she showed up in her favourite ikat sari—the telia rumal.

The telia rumal is truly an unusual fabric, one that pops up only in textile history books. The yarn is first treated with oil, then using the ikat tradition (binding), it is dyed with vegetable colours, usually in reds, black and white. It is the only technique in which the yarn is dyed before it is woven into the fabric. The bindings are altered to create patterns, and the process is repeated multiple times. It is obviously labour-intensive, as getting the patterns to look neat in pre-dyed yarn is hard. The nizams of Hyderabad were great patrons of the telia rumal. 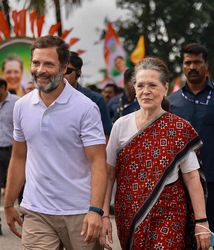 It originated from Chirala in Andhra Pradesh, one of India’s best weaving regions. The weavers then introduced it to the Puttapaka village in Nalgonda, Telangana, which has recently acquired the GI for telia rumals.

Sonia and her vibrant red telia created magic. Karnataka’s ladies had eagerly queued up to see “Indira Gandhi’s daughter-in-law”. An article in The Indian Express quoted a spectator saying, “All the ladies from Karnataka have arrived here. We want to tell her all women stand with her and seek her blessings…. We don’t mind waiting for another six hours if required.”

Sonia inherited a love for handloom saris from the senior Mrs G. While Indira adopted handwoven fabrics much in the spirit of the freedom struggle, she developed a love for each state’s textile history. Handloom fabric—still associated with villages, hunger and poverty—was what connected India’s poor to the most powerful leaders in the country. It was like those in the corridors of power were paying obeisance to those in the villages.

I imagine it must have been hard for Sonia—a glamorous Italian from Turin who dressed rather nattily in European fashions in her Cambridge years—to switch to the wardrobe of our villages. But she never showed it. Maneka Gandhi once remarked that Sonia inherited Indira’s entire wardrobe.

And what a wardrobe it must have been. Indira famously had saris from every state, and possibly district. She also loved wearing the textile of the state she was visiting: a Maheshwari in Madhya Pradesh, a Bodo weave in Assam, or a Sambalpuri ikat in Odisha. Sonia began doing the same, hence the telia rumal from the area’s weaving block.

At the wedding of Kapil Sibal’s son, she is said to have complimented a guest on her sari recognising its provenance, so thorough was her knowledge. Since going to exhibitions is a security risk, Congress leader Archana Dalmia has been picking up saris for Sonia. Like her mother-in-law, Sonia’s sari blouses are deliberately tailored modestly. You can barely see an elbow, let alone a waist. Instead, they show off her sweat pods, the true mark of a field worker.

It is amazing how one image—that of a 75-year-old woman in a native sari—has brought so much cheer to the nation. Her choice of sari is not just a sign of restraint and elegance, but it is also a reminder that the number one rule in politics is this: Stay as close to the grassroots as you possibly can.