Even as a revolution over the mandatory hijab rule is shaking Iran after the arcane custodial death of Mahsa Amini three weeks ago, themes of dressing and undressing have swept through the fashion world, too. Bella Hadid (whose father is the Palestinian-Jordanian Mohammed Hadid, a renowned real estate developer in the US and a strong advocate against hijab enforcement in Iran) arrived on the Coperni runway at Paris Fashion Week wearing a skin-coloured thong and covering her breasts with her hands.

Within minutes, two technicians followed with aerosol cans, and sprayed on her a sensual white cocktail dress. The fashion-meets-technology outfit broke the internet thanks to its waste-free message. But it also questioned the obsession with fashion. How special is it if it comes out of a can? Never mind that, Coperni is now a household name thanks to one visual that made him go viral. 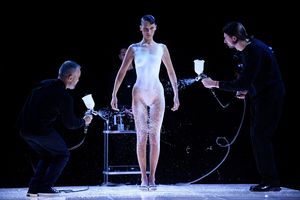 All the shows at Paris Fashion Week last week presented clothes that were less about comfort and repeat wear, and more about gathering likes on social media. Like Paris, its fashion week is a moveable feast, too, raising the bar for the rest of the world to follow. Post-pandemic’s revenge dressing is an abettor to this fantasy. But with the world’s currencies dipping, will these one-time wonders find space anywhere after their red carpet appearances? Perhaps not, perhaps they may only help the designers sell more perfume bottles or handbags.

Interestingly, it was Bella Hadid again who wore a Schiaparelli dress at Cannes in 2021, with a neckline that cut below the chest. Hadid’s breasts were covered by a necklace shaped like the bronchi passageway of the lungs. At PFW last week, the label paid homage to its surrealist founder Elsa Schiaparelli (she was buddies with Man Ray, Salvador Dali and Jean Cocteau), by making clothes that not only spoke of worldwide unrest, but also got people talking. Overt display of breasts and nipples were less about raciness and more about revolution, with corsets, gold-dusted hips and a shirt-less red twin set with black ants beaded all over it, clearly a tribute to Dali.

Even prissy-missy Valentino decided to play the viral game. Its signature ballooning shapes, vivid colours, rich fabrics and elegant dresses were a little more adventurous than usual, with the label’s V-monogram turned into a print that even covered the model’s face.

Zendaya had her share of breaking the internet last month with a white Loewe gown with an anthurium-shaped bodice. The label followed it up on the runway with cocktail minis constructed to look like they had anthuriums floating on them.

The Swedish brand, Acne Studios, celebrated its 10th anniversary by forgoing their denim and leather staples for girlie, even sexualised styles. Bows covering breasts, ruched heart appliques, and a large grey ribbon that looked Scotch-taped on the body to make for a dress. A Barbie pink satin dress resembling a bed sheet had been draped over the model.

Perhaps the idea of couture is still to shock and awe. In a world that is seeing more than its share of anarchy—with a global health crisis, rising inflation, an ongoing war and women being killed for literally letting their hair down— there is little else fashion can do but crank up the volume and make you escape.