Headscarf - symbol of religious oppression - can become emblem of inclusion

Veil is ghoonghat for Hindus, head-covering for Christians, and tichel for Jews

A simple post by me showing solidarity with women across the world and the nuances of feminism seems to have taken the internet by storm. It has received almost three lakh likes and has been shared by women like Gigi Hadid, Padma Lakshmi, Nargis Fakhri, Tamil star Aathmika and scores of others. Two sets of women across the world are simultaneously engaged in the same battle—to keep the state’s rules out of their bodies and dress codes. 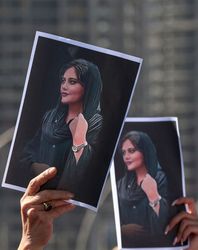 Iran is seeing a major civil rights movement led by its women since last week, after the unfortunate death of a 22-year-old Kurdish girl, Mahsa Amini, in police custody. In India, the Supreme Court has begun to hear the petition to allow students of a Karnataka public school to wear the headscarf as part of their uniform.

Several Indian feminists are against the hijab, seeing it a symbol of religious oppression. Is the freedom of choice moot? Is faith wrong?

These are complicated questions, especially in an increasingly polarised world. Ideas of dress and nakedness vary from culture to culture. For some, not wearing a headscarf is considered naked. For others, wearing a sports bra and shorts is considered dressed. Several factors influence the way we perceive our bodies, but unfortunately the two most defining ones are religion and politics, both fronted by men.

In 2019, terrorist attacks in Christchurch, New Zealand, saw the country’s prime minister wear a headscarf in public to show solidarity with the Muslims of the country. Last week, Rahul Gandhi’s padyatra picture with a young Muslim girl in a headscarf saw memes galore proliferated by right-wing groups. The scarf, a symbol of religious oppression, can also become an emblem of inclusion.

Hijabs, veils and burqas have come under great scrutiny in the last few decades. In the Middle East as well as globally, women are returning to the veil thanks to orthodox beliefs and Salafist propaganda, but also as an affirmation of faith when the west is showing open support for Israel.

The veil, of course, shows up in several cultures, like the ghoonghat for Hindus, or the head covering for devout Christians and nuns (even Mother Mary’s head is always covered), and the tichel for Jews.

Iran is seeing women burning their hijabs publicly and chopping off their long manes, as the politics of hair takes centre stage. Hair has often been used as a visual shorthand. Angela Davis’s Afro became a symbol of the civil rights movement of the 1960s in the US. The punk movement of the 1980s saw anti-establishment mohawks. The iconic fashion designer Vivienne Westwood shaved her head in 2014 to draw attention to climate change.

Iran’s women, who have not been allowed to expose their hair, are now turning it into flags blowing in the wind. It reminds one of The Wind in my Hair, the memoir of Masih Alinejad, one of the most famous Iranian feminists, where she argues that the revolution in Iran was a revolution against women.

Iran’s women are reclaiming the revolution, taking us back to King Reza Shah Pahlavi’s reign from 1925 when he ordered women to remove the hijab (they were forced back into it in 1979 by the radical Ayatollah), or Cyrus the Great’s Persia, where women and men had equal rights and freedoms.

Frida Kahlo’s ‘Self-Portrait with Cropped Hair’ (1940) shows the artist holding a pair of scissors, with a severed braid of hair lying on the floor. Above are the words, “Look, if I loved you it was because of your hair. Now that you are without hair, I don’t love you anymore.” Kahlo’s art harked back to her divorce from Diego Rivera the year before, and her newfound autonomy.