Post pandemic, traffic in malls is yet to turn into revenue

To truly thrive, they need customers who buy and not just browse

I have always believed that if you want to know how healthy a country’s economy is, go to a mall.

It is a simple premise really: If it isn’t sale season (January and July are usually end-of-seasons, but in India we also have a Diwali sale and an Independence Day sale) and stores are still offering a discount, you know people are not shopping and there is excess stock. If the malls are empty of customers, it is a fiscal red flag, too. But post-Covid, there have been so many mixed reactions that it is hard to hold on to the old checklist.

For one, most of India’s malls are full. The last month has taken me to four malls in two cities, and much of the public behaviour has been the same. Delhi’s DLF Emporio, easily the most stylish mall in the country simply by virtue of the sizeable international brands available here, looked like a railway station teeming with people. I saw something I had never before witnessed in India: a queue outside a store. The large Louis Vuitton store by the entrance had as many people waiting outside as there were inside. Perhaps it is post-pandemic protocol that did not allow for a full house, but that queue was a sight for worried eyes.

Back in Mumbai, the malls are suddenly brimming over too. Even though they have been open for close to a year now, they have never seen such heavy footfall. The Palladium and High Street Phoenix malls are buzzing with families and friends out for the day, whether to browse or to dine. The newly opened Jio mall at BKC has been empty for too long, despite its small capacity. But last week, it seemed to be thriving. This is unusual because few retailers are actually translating footfall into sales. While customers are packing into department stores, few are making purchases like they did a few years ago.

In fact, both last month’s India Couture Week and next month’s Lakme Fashion Week have several shows inside malls, but the traffic is yet to turn into revenue. 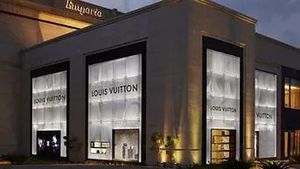 Moreover, several malls across India have turned into ghost malls. These are former or would-be malls that have remained empty grids, without any or many shops and thus, no customers. According to international property consultant Knight Frank, India has several such ghost malls. The company’s ‘Think India, Think Retail 2022—Reinventing India’s Shopping Malls’ report says that as many as 57 malls in the top eight cities of India—equalling 8.4 million square feet—are currently in decrepit condition.

Mumbai’s Atria mall at Worli and the CR mall at Nariman Point are classic examples of malls trying to hold on to their space with renewed retail interventions. The Atria mall was once popular as a midtown space, but could not compete with the scale and diversity of High Street Phoenix just behind it. It now houses a giant premium multiplex space and a large sports goods store, Decathlon. The Nariman Point mall is also saved by the same multiplex, the first and still the finest one in south Mumbai, but the stores and F&B outlets are nothing great.

This is not to say that Indian brands are not opening stores. At least four new fashion stores by Indian labels have opened in Colaba in the last year alone. Indian labels say they get a rough deal at malls, who reserve their prime ground floor spaces for international labels and thus, demand higher rents. Moreover, many of the top malls are already leased out.

Indian malls will have to have enough international as well as domestic brands to survive. But to truly thrive, they need customers who buy and not just visit malls for leisure.