What the Queen's clothes said about her

The Queen had a full spectrum of hues, from indigo to pink to yellow to green

When Diana died in 1997, I was but a slip of a girl, barely absorbing the news of the death of a glamorous princess chased by paparazzi. Within a few days Mother Teresa would pass, and somewhere along the way their personas became unified as two kind, extraordinary women who had left the world mourning.

When William and Catherine married, I should have had my senses about me. But after multiple trips to magnificent London, I was utterly besotted with all things English—right from Alexander McQueen to Stella McCartney to All Saints (okay, also sticky toffee pudding). I watched the wedding on TV wearing a ridiculous fascinator from H&M, and asked friends to send over memento teacups and kitchen towels. 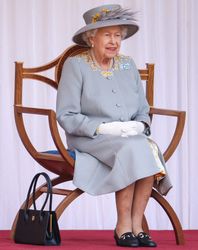 Queen Elizabeth II was always this grandmotherly figure who loomed behind the younger women of the family. Diana hated her mother-in-law, but both Catherine and Meghan adored her. She always remained old in my subconscious, like the cuddly grandmothers at our posh sports clubs who show up at festivals in lusciously bright colours and big brooches.

But her death feels personal. The international outpouring of grief is unfathomable if she was indeed as irrelevant as critics of the monarchy would call her. Whether debunker or loyalist, one must understand the passing of the queen to glean what she meant in the modern world.

For one, she was a woman doing a man’s job. Like many women around the world, she was not supposed to be queen. The inheritance came to her because she got lucky. When her uncle abdicated the throne, and her father George VI was pronounced king, she became “heir presumptive” not “heir apparent”; perchance daddy would produce a boy.

Once she became queen as a young mother and wife at 25, she took her role seriously. She did not behave like the boys. She maintained her femininity and played her role as a warm and benevolent matriarch instead. Thanks to an army of governesses that her life of privilege granted her, she had no excuse not to be at work. Her last two children were born during her reign, and she was back to signing papers in one or two days after their birth. Charles, now King Charles III, had reportedly stated that he was not raised by his parents, but by nursery staff.

In public, her uniform of vividly coloured coat dresses became her armour. She would be the first one spotted in photographs, even when she was not wearing a crown. Her office wardrobe consisted of the little hat that exposed her face, the square-heeled shoes (Anello & Davide) she could wear all day, and a trusty black purse (Launer). At home she wore headscarves like a country matron. She had a full spectrum of hues from indigo to pink to yellow to green. “She was literally a rainbow, a symbol that brightened up a room and whether that person was Nelson Mandela or Martin McGuinness, she had a magnetism that made all sorts of people smile,” writes Jo Ellison in the Financial Times, who had studied every outfit the queen wore for a year while working for Vogue.

The global outpouring of condolences, including an open letter from Vladimir Putin, demonstrates that her influence went beyond politics and she was skilled at international relations. Being a woman, she brought soft skills to her job. She may have inherited a violent history (when she was born in 1926, the British empire covered a quarter of the world), but her demeanour was always one of warmth and reconciliation. In 1961, she visited Ghana and danced with former president Kwame Nkrumah, a renowned anti-colonialist, and showed she meant friendship. I am only wondering how a man would bring peace the way a woman did.