India is changing, and so are its weddings

The India Couture Week celebrates 15 years of existence, and in case you did not know this, it is totally okay. A decade and a half later, little has changed at the couture week. Never mind that it did have a Covid-induced break for two years; it has returned as jaded as it had signed off.

The stock of designers was the usual Delhi suspects—friends of the organising committee—with almost every show sponsored by some local jeweller or the other. The venue was the uninteresting Taj Palace hotel (home to the first India Fashion Week 22 years ago), or then some offsite at an unremarkably dressed address. We stood under tube lights and had cocktails in plastic cups. If this is how couture is experienced, I am banishing myself to Zara jeans forever. 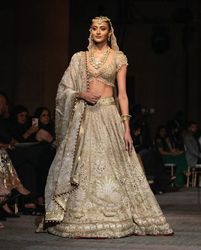 But mostly, it was the clothes. Varun Bahl, Tarun Tahiliani and Amit Aggarwal largely presented lehengas. Falguni Shane Peacock’s skirts were so gargantuan that they could hide the bride’s lover underneath. I do love Indian clothes in all their multitudinous expressions—saris, lehengas, salwars, angrakhas, anarkalis, kediyus, dhotis and sarongs. But the lehenga has always superceded all other outfits in couture, simply because it was the choice of rich daddies’ little princesses on the biggest day of their lives (until the quiet exit divorce, of course). Indian couture equalled the Indian lehenga, and since everyone made money, we were just fine with it.

But today, I am not sure if the bridal designers have got it right. India is changing, and so are its weddings. Younger brides are more focused on themselves than their few hundred relatives. Weddings are more intimate affairs, with only the near and dear invited. How do you wear an ornate lehenga to a party of 50 then? Don’t ask Alia Bhatt, because she refused one. Bhatt chose to herald the change by wearing an ivory sari (still Sabyasachi, every superstar’s first choice) when she married colleague Ranbir Kapoor at their home in April.

The story of Indian couture is also the story of Delhi. The reason outrageous lehengas thrived in the capital is because of its excessive corruption. India’s infamous black money popularised the overblown lehenga, otherwise an elegantly embroidered 12-16 paneled skirt marrying north India’s Mughal traditions with its neighbouring Kutch’s dress code.

But more women in the workplace has changed this. The millennial woman feels ridiculous in keeping up with the Joneses. She is all about celebrating her own personality and independence. Working women will make more practical choices. They will choose an item that gives them real value for their hard-earned buck—either something they can repeat often, or otherwise a sentimental heirloom. And definitely something they can store and pull out with commensurate ease.

The sari is, thus, the new lehenga.

Take Bengaluru, for example. The IT-employed bride is happy to get married in her jeans and get to the office by noon. If she is celebrating, she will pick a traditional Kanjeevaram weave and match its glimmer with her gold temple jewellery. Same with Kerala—the white-gold kasavu’s elegance will not be exchanged for northern bling. Hyderabad’s couture designers—the many Reddy ladies—are thriving, mostly thanks to the same reason as Delhi’s designers. Although here, too, the traditional ceremonies see the brides in saris.

How long will the north pander to the north alone?

It reminds me of the closing night party of the Fashion Design Council of India (FDCI), when the designers’ collective awarded each other and anyone else around them for, well, just hanging around town.