Pakistan Prime Minister Imran Khan unknowingly paid a compliment to the Indian leadership when he remarked last week, “A leader who does not take U-turns as per the requirements of the situation is not a real leader.” Khan was drawing an analogy from his cricketing days when he would deviate from an original strategy as a match progressed, because of exigencies. Cricket is an unpredictable game.

But when it comes to statecraft, there must be something terribly wrong in the first instance when a government finds itself in a cul-de-sac. The Narendra Modi government took a U-turn last week by its decision to attend the Moscow conference on Afghanistan. The plea that it was an “unofficial” participation, and that there were no “direct talks” with the Taliban cannot detract from the fact that there has been a U-turn from India’s stance that the Taliban has no locus standi and are a terrorist group backed by Pakistan to foster cross-border terrorism who, therefore, constitute a threat to regional security. 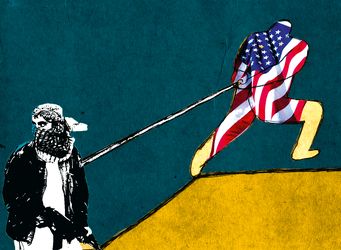 In fact, the international community has been known to keep contacts with the Taliban based on the estimation that it would be a legitimate party in any political settlement. But India was a rare exception holding on to the opinion that the Taliban lacked a habitation and name.

The government’s stance was a patently contrived one. The heart of the matter is that the Taliban became the “objective correlative” of the government’s policy to shun any form of dialogue with Pakistan and to keep the relations with that country in a state of animated suspension. Under the Modi government, India’s Afghan policy became an adjunct to its policy toward Pakistan, while the policy toward Pakistan as such became a template of hindutva agenda.

Thus, a zero sum mentality came to prevail that a government in Kabul friendly toward Pakistan would be detrimental to Indian interests. Unsurprisingly, Afghanistan became a turf for making hostile moves toward Pakistan. This inevitably led to India’s link-up with interest groups in Kabul, who have reasons of their own to want the gravy train that the US-led war against the Taliban represented to run forever.

Alas, India jumped on the bandwagon with the US strategy to fight and defeat the Taliban militarily. It was a flawed strategy because there was no conceivable way the US could hope to achieve with 15,000 troops on the ground what it could not with eight times that number in 2011 under Barrack Obama. In sum, the government’s U-turn is actually borne out of a belated realisation that the Donald Trump administration is losing faith in its own Afghan strategy and is accelerating its moves to engage the Taliban in peace talks.

Delhi suspects that the Americans are likely to cut loose and head for the exit door much sooner than it would have imagined. That is to say, the Modi government’s U-turn on the Taliban is far from authentic and is more an abject act of resignation borne out of the dismal prospect that the US is keen to end the war. Clearly, America’s fellow travellers and its Afghan lackeys feel badly let down.

In these circumstances, the chances are very slim that the government’s U-turn on the Taliban will bring any significant dividends unless it reflects new thinking toward improving India’s relations with Pakistan. As things stand, Pakistan will make sure that India will never again use Afghan soil to hurt its vital interests. And the best India can hope for is that Afghanistan does not become a revolving door for militants once again.