Last August, US President Donald Trump named India as the crown jewel in his administration’s new South Asia strategy. Many Indians celebrated. But, eight months down the line, the word from the Wuhan summit is that Prime Minister Narendra Modi and Chinese President Xi Jinping reached an “understanding” to undertake “joint economic projects” in Afghanistan. It bears the hallmark of a Chinese initiative. The external affairs ministry spokesman said that the two countries will flesh out “this understanding… in the near future” and identify specific projects.

India’s regional policies are taking wing. At its most obvious level, Delhi is signalling that Afghanistan is not a turf for rivalry with Beijing. On a broader plane, Delhi is sampling the Chinese advocacy of “win-win” cooperation. Strategically speaking, the irreducible minimum would be that Delhi and Beijing are on the same page in regard of Afghanistan’s stability and security—stakeholders in regional security.

It is a game changer.

The Afghan ministry of economy says the Five Nations Railway Corridor (2,100km-long railway line, connecting China’s Xinjiang with Iran’s sea ports via Kyrgyzstan, Tajikistan and Afghanistan) is one of the projects that India and China may undertake. If so, India-China cooperation in Afghanistan has deeper regional implications. Fifty per cent of the proposed regional rail corridor—1,148km, to be exact—will pass through the Afghan provinces of Kunduz, Balkh, Jowzjan, Faryab, Badghis, and Herat. Suffice to say, Indian involvement can be very substantial. (Incidentally, India is also involved in the construction of a railway line connecting Chabahar Port in southeastern Iran with the Afghan border.) The technical and economic assessments of the first and second phases of the proposed Five Nations Railway Corridor have been completed and construction work is expected to start soon. 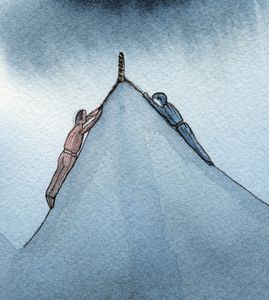 For Indian analysts struggling to assimilate China’s Belt and Road Initiative, this will come as an eyeopener. The estimated value of the railway project exceeds $2 billion, and the principal institutional partners are China, including the Bank of China, the Asian Development Bank and World Bank. In sum, although the Five Nations Railway Corridor is a flag carrier of China’s Silk Road Economic Belt (which was announced by Xi in 2013), Washington is not blocking it; nor is China averse to external funding or Indian partnership.

The Indian discourses on regional connectivity have suffered from our zero-sum mindset. But, the government has displayed new thinking and for strategic analysts, there is some catching up to do. Equally, those who rushed to celebrate any Sino-Indian cooperation in Afghanistan as tantamount to a Chinese “snub” to Pakistan must rethink. All in all, Modi and Xi may have unveiled a tantalising vision, which implies that there is nothing really absurd about a railway corridor that links Xinjiang with the world market that also serves as access route for India to Afghanistan and the Central Asian region—and Xinjiang itself.

At some point in the future, the Five Nations Railway Corridor would have a “loop line” connecting Peshawar, Lahore and Karachi as well (which, of course, would bring it breathtakingly close to Wagah border.) Pakistan is actively marshalling opinion among the Central Asian states to build on the nascent Chinese idea to extend the China-Pakistan Economic Corridor to Inner Asia.

Statesmanship is many things. Fundamentally, it lies in the capacity to think about the next generation. When it comes to diplomacy, statesmanship is largely about knowing the right time and in the manner of yielding what is impossible to keep. The great French bishop-cum-politician-cum-diplomat who represented the Catholic Church to the French Crown in the late 18th century, Charles Maurice de Talleyrand, once said, “The art of statesmanship is to foresee the inevitable and to expedite its occurrence.”