Should you rock your baby in a home-made sling?

LAST WEEK I was cleaning out a cupboard that has things I have held on to for sentimental reasons. One such item was my mother’s sari―a beautiful, soft, off-white Jamdani cotton sari with birds and branchlets woven in pretty pinks and forest greens. I had used this sari to rock my baby to sleep by suspending it like a traditional jhula. To my surprise and perhaps justifiably so, my baby used to be wide awake inside it, distracted by the colourful motifs on the sari around and above her. So, is it safe and effective to use this time-tested, traditional baby rocker? The medical world and continued use of this ancient method point in different directions.

Traditionally, the jhula comprised a single, soft sari that was hung and fastened over a beam in the house or the branch of a tree (if the mother was working in the fields) to allow a mother to rock and check on the baby while she carried on with her work.

The cocooning of the baby inside a jhula was believed to be a reconstruction of the baby's position inside the mother's womb. Using a jhula was, therefore, considered a sure-shot way to put a baby to sleep.

More recent research has, however, shown that these jhulas are not capable of providing the support a baby’s spine requires in its first year. Rocking a recently nursed baby in it can also cause the baby to throw up the milk. Third, if the person rocking the baby experiences a momentary lapse of control out of sheer exhaustion or inexperience, there is every chance of the jhula with the baby in it hitting against a wall or piece of furniture.

Doctors across the world today caution against rocking a baby (especially the baby’s head and neck) too vigorously when the baby is placed inside a sling or on one’s lap.

Rocking, if attempted, should be very gentle. At no point should the baby be bobbed or jolted. New parents should also be aware that babies can also get addicted to the rocking action and might insist on being rocked every time he or she is put down to sleep. 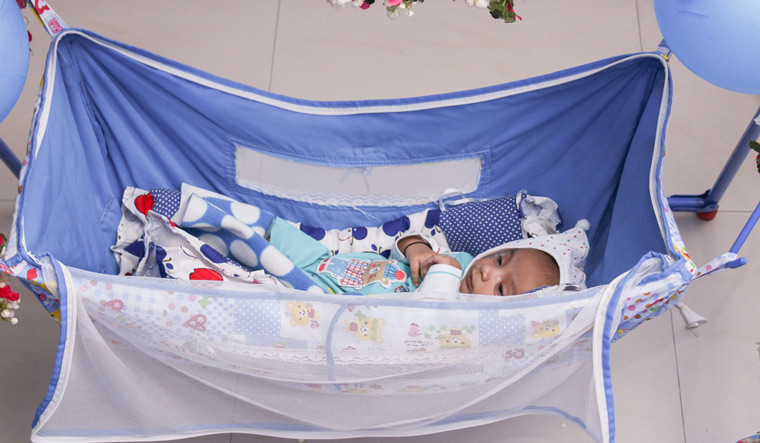 Interestingly, some physiotherapists recommend placing pre-term babies inside a jhula to elicit quicker motor responses. They feel that when preterm babies are ensconced inside a sling, they are forced to shed their natural position of sleeping―of stretching one’s arms above the shoulders with closed fists―to placing their hands along the sides of the body. This position forces a specific motor response (of reaching out for a caregiver by sticking out their hands) otherwise seen late in pre-term babies.

The choice to use a jhula is a personal one. But it is a choice that must be made after taking considerable precautions and observing its efficacy in putting your baby to sleep.

Some tips for using a jhula

● Select a soft and durable sari that can take the baby’s weight.

● Make sure the sari is tied around a strong pole/beam.

● For extra precaution, place a small baby bed or mattress under the jhula so that if the baby tumbles out of the sling, it can have a soft landing.

● Check the sari periodically to make sure the baby has not soiled it.

● After placing the baby in it, do not move the rocker vigorously.

● If your baby doesn’t fall asleep in it, then shift to more sturdier options, like a baby’s crib, mobile cribs, bassinets or baby carriers.

NEXT ISSUE: Do curds and warm milk put babies to sleep?