Baby massages are an art and science with a mind-boggling set of benefits, both real and imagined. One such imagined benefit is that the two depressions found on the head of the baby can and must be closed by applying oil into them during the massage.

The two depressions on your baby’s head (anterior and posterior) are called fontanelles. They are openings in the skull that allow the head to pass through the vagina during labour without any major injury or damage. The depressions also allow room for the skull to fuse and the brain to grow during the first year.

While the front fontanelle closes by the time a child turns 18 months, the one in the back closes by the third month. Ask your doctor to take a look at the fontanelles at the end of the specified period to make sure that they have closed on time.

Since the fontanelles close anywhere between 3 and 18 months, maalishwaalis (masseuse) may have concluded that the depressions close from persistent massaging. However, we now know that the closure is a natural process.

Another routine carried out in some homes is the removal of excessive baby hair. A soft, slippery dough made of wheat and ghee is used as a waxing strip. This procedure is believed to help control hair growth. In truth, babies are sometimes born with very soft hair covering various parts of the body. This is called lanugo. Normally, this falls by the eighth month of pregnancy. Lanugo is replaced by a second kind of hair—vellus­—which includes the first crop of head hair seen at birth. Vellus is again fine, soft, may or may not be pigmented and gradually gives way to coarser, longer and pigmented hair. Since both vellus and lanugo are very fine, they can be removed by any home hack. However, growth and texture of body and head hair are genetically pre-determined. So, the chances of bringing down the rate of growth or thickness is unlikely. 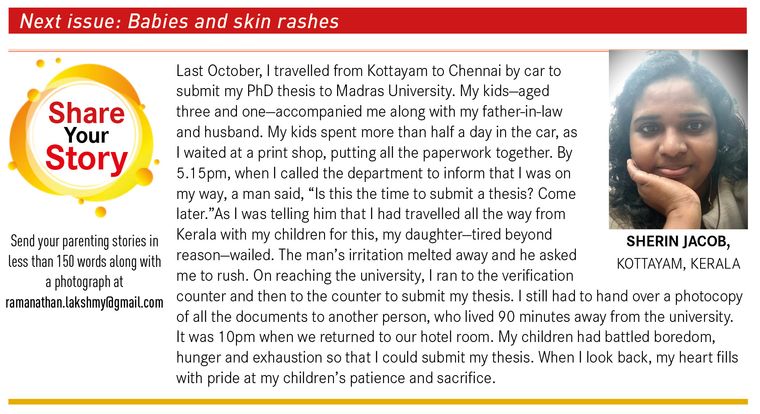