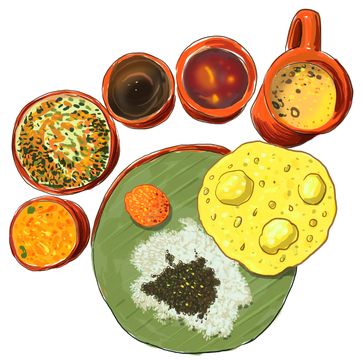 NEW MOTHERS, especially in the four southern states, follow a form of regimented diet starting from the third or fourth day after the birth of their baby to the fortieth day. Called pathiyam samayal in Tamil, which roughly translates to ‘diet for particular needs’, it is intended to nourish and restore a new mother’s health without agitating her digestive system.

A new mother's health is particularly paid attention to during this time because the bleeding or spotting that she will experience after a vaginal delivery, called lochia, roughly lasts for six weeks.

Postpartum diet, with its own set of rules and regulations, is common across India. Climatic conditions in the region and availability of fruits and vegetables seem to determine these rules.

In the south, where it is warmer, food that are lighter on the stomach are encouraged to help with digestion. While a pathiyam diet ticks all the right boxes, it might be lacking in flavours that you crave for. Giving in to dietary cravings now and then would be sensible, lest you feel pregnancy and postpartum is one long punishment!

A few tablespoons of potato curry or a fried papaddam or appallam will do no harm other than adding a few extra calories. Root vegetables are not always troublemakers. Every body reacts to a food type differently. So does every baby to its mother’s diet. Some babies can be acutely sensitive to a sudden hike in spice or masala; others that have been exposed to a variety of food inside the womb will find themselves unmindful or even enjoying the small bursts of new, interesting flavours that have entered the breast milk.

The only way to know if a baby will react in a bad way to what his or her mother eats is by experimenting. Typical signs of allergy include continual fussiness while feeding along with rashes or vomiting or colic pain or constipation or diarrhea or green stools with blood or mucous and continual spitting (reflux). You might have to observe your diet closely and cut out a suspect food type for at least three weeks to see if the baby is coping better during this period.

If your baby didn’t bat an eyelid the first time you gorged on dum biryani or radish sambar (or 24 hours later), then relax and don’t restrict yourself to a dull, repetitive diet. Spice things up!

Gassiness in infants is a developmental issue that they will outgrow with time. Infants under six months are likely to have a lot of gas and experience pain while passing wind or during a bowel movement. They are also likely to show gassiness from gulping too much air while crying or feeding from a bottle that has a big outlet in the nipple, or while gulping milk too quickly from the mother’s breast out of hunger or forceful letdown.

Next issue: Bathing the baby