In 2012, I was fortunate enough to spend time with Alfons Hug at documenta 13. I was there as part of a BRICS curatorial travel programme. Later, we presented a video art project that he had curated at the first Kochi-Muziris Biennale. Hug is an important curator who has done many significant projects in the last 20 years. He curated the São Paulo Biennial 2002, the 2002 and 2005 Brazil Pavilion and the 2011 Latin American Pavilion at the Venice Biennale. He was also chief curator of the 2nd Montevideo Biennial. Earlier he was a curator at the House of World Cultures in Berlin. He has also been the director of the Goethe-Institut in many countries.

I think of Hug as an energetic vagabond. I want to mention him because of his enthusiasm for art and his selflessness. When I was rushing to catch my flight from Zurich to Mumbai after the Basel Art Fair, he stopped me at the gates and, without any introductions or formalities, started talking! “Unlimited at the Basel Art Fair is like a biennale,” he said. The mind of a critic-curator, I thought. He had said the same thing I had felt. 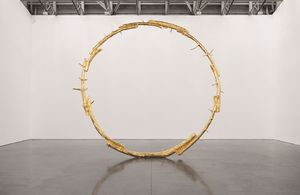 The Sun by Ugo Rondinone at unlimited 2019 | courtesy: Art Basel

Unlimited reinvention is difficult in the habitual and ostentatious heavy-art market. But, eight years ago, Art Basel introduced this incredible parallel project called Unlimited. The man behind it, the young Swiss curator Gianni Jetzer—now in his final year of curating Unlimited—is also curator-at-large at Hirshhorn Museum and Sculpture Garden, Washington, DC. Every time I get the opportunity to go to Art Basel, I look forward to Unlimited. Of course, at the adjacent Messe building you have galleries from around the world and exhibitor Indian galleries like Chemould Prescott Road, Gallery SKE, Vadehra and Experimenter. The six-day fair is attended by around 80,000 people. Next door, you see the Miami Design Basel with all kinds of products, furniture, jewellery, vintage cars and many more designs.

The Kunstmuseum exhibitions of William Kentridge with the largest installations and eight-channel projection was remarkable. The same project was exhibited at the recent edition of the Kochi-Muziris Biennale. The effects of charcoal, animated skilled drawings and the narrations through the performances; its layers and dark surfaces and the shadows, the drama... pure Kentridge! Fondation Beyeler put up two great shows. The first titled The Young Picasso-Blue and Rose Period, and the second an immensely skilled presence of images, mediums and materiality presented by artist Rudolf Stingel. I was seeing it all for the first time. I cannot forget Picasso’s mastery and Stingel’s mesmerising material aesthetics.

Another good exhibition was Body Fantasies by Rebecca Horn at Museum Tinguely in Basel. Her works combine early performative works and later kinetic sculptures to highlight lines of development within her oeuvre, the transformation processes of the body and very sensitive and calculated sciences and mathematics in human structure.

Another great experience was a piece of home at the border of Germany. Vitra Design Museum presented on the Indian architect, Pritzker Prize-winner B.V. Doshi. I think this was the master’s first international retrospective. I took a 30-minute ride from Basel to Vitra to see it.

I was also fortunate to meet the legendary Argentinian artist Rirkrit Tiravanija. We were introduced by the curator and writer Hans Ulrich Obrist. Tiravanija resides between New York, Berlin, Chiang Mai and Hong Kong—another vagabond! His installations often take the form of stages or rooms for sharing meals, cooking, reading or playing music. The architecture or structures for living and socialising is the core element in his works. His work, I think, is important because this creation of spaces for coexistence is one of the essential elements of art itself.