The breakup of Yugoslavia led to the formation of (currently) six independent states: Bosnia and Herzegovina, Slovenia, Croatia, Macedonia, Serbia and Montenegro. Slovenia was the first to declare independence, in June 1991. I recently visited its capital, Ljubljana, for the board meeting of the International Biennial Association. International Centre of Graphic Arts director Nevenka Sivavec hosted us there for the 33rd Ljubljana Biennial of Graphic Arts.

The biennial was curated by the collective Slavs and Tatars (S&T). It is a pleasure to see more and more artists and artist collectives curating major exhibitions. Kochi-Muziris Biennale has always been curated by an artist. The next Sydney Biennial has artist Brook Andrew as artistic director. Artist Sheikha Hoor Al Qasimi will be curating the next Lahore Biennale. Indonesian artists collective Ruangrupa will be at the helm of the next documenta in 2022. Raqs Media Collective will be curating Yokohama Triennale 2020. 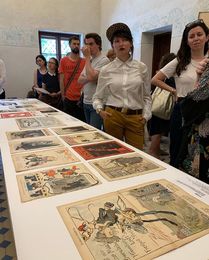 S&T produces exhibitions and publications around the region east of Berlin, usually called Eurasia. It works with texts, and words are their main tool and medium. Occasionally, the group performs its own writings. The Ljubljana biennial, titled Crack Up-Crack Down, was a visual art biennale, which included sociopolitical satire, caricatures and archival material, much like its art practice. It was conceptual, complex, incomplete and comforting.

I was pleasantly surprised when Mayor Zoran Jankovic hosted us at the City Hall. It is important that civic authorities take part in cultural activities. After the introduction, the mayor got up and held a flag from the line of flags and said proudly: “You know this flag—Ljubljana’s. We were the European Green Capital for 2016.” In the short time we spent at his office, he came across as a people’s mayor. He was on ground, without any ostentatious security or tamasha.

I also want to write here about a gift from the mayor: a one litre glass bottle. And, Mateja Demsic, head of the city's cultural department, told us its story. The bottle has the words 'Museum Water-Water for the Future' embossed on it along with indentations formed by a left hand. The bottle tells us that Ljubljana is a city in which fresh drinking water is available in abundance. Apparently 80 per cent of the river water is drinkable.

The bottle was created as part of an exhibition on water at the city museum. It brought together some 250 objects from museums, galleries and archives around the city. In the show, water is an element for our survival, forms pathways for transport, flows through our mythologies, and is part of our languages and arts. In India, every day we read about problems related to potable water. We have many things to learn from the care given to water bodies in places like Ljubljana and the recognition of it in cultural activities.

City Museum director Blaz Persin took us on a special walk through incredible collections from the Russian museums. Ljubljana is building a space for culture, and Persin showed us its digital 3D presentation. The municipality invested ᙿ€10 million for the Sugar Factory (Cukrarna) Gallery project, while the state has given more than €2.5 million; €11 million will come from the European Fund for Regional Development. I was told that they see this as an investment with financial returns (in addition to the cultural impact) as 60 per cent of their foreign visitors are cultural tourists. For years, people have averted their gazes from the embarrassing ruins of what was once the largest sugar processing plant in the Habsburg lands. Now, Cukrarna will house the largest exhibition space in this part of Europe. The citizens will finally get appropriate premises for events such as BIO Ljubljana. Cukrarna will also be a future venue for the Biennial of Graphic Arts.

Ljubljana has a vision, and I await to see its realisation.