A decade or more ago, the rulers of Abu Dhabi envisioned Saadiyat Island as a dedicated zone for creative and cultural buildings. Last month, the department of culture and tourism of Abu Dhabi conducted Culture Summit-2019 that brought together artists, curators, institutional heads, museum directors, academics, social theorists and policy makers from 90 countries.

Reem Fadda, a regular visitor to the Kochi-Muziris Biennale, Art By Children (ABC) and an admirer of the Students’ Biennale and outreach programme, was present at the summit. Reem is an influential curator and it was on her suggestion that I was invited as a guest to the summit. The talks were well-conceptualised; the theme was ‘cultural responsibility and new technology’. Over 350 delegates and speakers participated in the five-day conference which stood out for its diversity of voices. I met and conversed with many figures from the international art world, including Richard Armstrong of the Gugghenheim Foundation, New York; Antonia Carver, director of Art Jameel, Dubai; Aaron Seeto, director of MACAN, Indonesia, and many others. 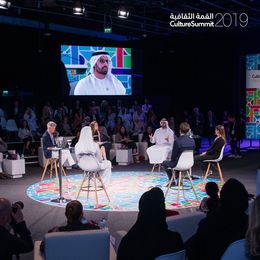 Unfortunately, I could stay only for two days in Abu Dhabi since I had to be in New York for the global jury meeting of the Absolut Creative Competition—a contest to identify young artists from 19 countries.

The competition is an initiative to find the next generation of bold artistic voices from across the world. The jury looked at local winners and their 19 artworks. We thought it would be easy to select the best among them. But, we eventually had many rounds of discussions before picking the winner. The global winner will be announced in Stockholm, Sweden, on May 15 in the presence of the 19 national winners and other dignitaries. The winner will receive a purse of €20,000 and will have his/her work displayed on a globally iconic out-of-home site like Times Square.

I was invited to experience a concept space similar to NeueHouse by one of my old friends, Priyanka Mathew (former director of Aicon Gallery, New York, and head of South Asian Art at Sotheby’s). Fifteen years ago, I had curated a show called KAAM, while Priyanka was with Aicon. She mentioned that Indian art collectors still ask her about the artists who were featured in that show. I had visited her temporary office space with huge, high- ceilinged spaces for exhibitions and performances in Tribeca, Lower Manhattan.

I received a few messages on social media. One was from a self-taught Malayali artist and consultant from Philadelphia, Mahinth. The other was from a KMB-2016 volunteer, Erin Montanez. I met them at Whitney’s High Line museum and later visited Chelsie galleries and museums. I was really excited to meet Erin. I used to see her at the KMB sites working diligently day and night. Erin, an American, would love to work with the KMB again. There are many brilliant volunteers in India and abroad like her, who give their heart and soul for the KMB, even though we do not have much money to offer. The commitment of such people cannot be explained in words. Their relationship with KMB endures because they experience passion, commitment and a zest for life in the centuries old trading port of Kochi... now known as the Biennale city.