First, the known fact: The Cabinet of Dr Caligari is a 1920 German silent horror film, directed by Robert Wiene. Considered the quintessential work of German Expressionist cinema, it tells the story of an insane hypnotist (Werner Krauss), who uses a somnambulist (Conrad Veidt) to commit murders.

Now, the unknown fact: Deepan Sivaraman has given it a contemporary feel with his student production, done as part of a course titled ‘Space and Spectatorship’, at the Ambedkar University Delhi, where he teaches. It was presented by Performance Studies Collective, Delhi, in collaboration with NECAB and Blue Ocean Theatre, Bengaluru.

I am neither a theatre critic nor a writer, but my career began with an association with the proscenium play. I was an amateur theatre enthusiast and my passion for theatre ended because of my stage fright and lack of confidence. I could not, to save my life, face the public. And, I was all of 14 years old. Yet, between the ages of 17 and 25, I was active in theatre and worked with a lot of productions and won several awards. But that was not my calling. 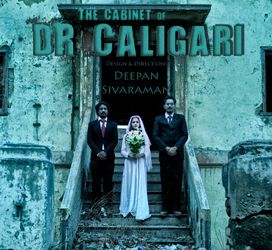 My bonding with theatre began at my ancestral house when I saw my brothers, cousins and friends rehearsing at home. Some of the plays that are etched in my mind are G. Sankarapillai’s Thavalam, Mario Fratti’s Pep, Samuel Beckett’s Waiting for Godot, John Abraham’s Chennaikkal Adhava Pattinimaranam and T.M. Abraham’s Albhuthanganam, which was directed by the eminent Jose Chirammel. Narippatta Raju, Purushothaman and other theatre experts used to spend a lot of time at home. The tradition continues with my sister-in-law Thankam and younger brother Mohan. My village, Mangattukara, near Angamaly, Kerala, is still an active home for experimental theatre and culture. I have seen and still see passionate practitioners of theatre even if they struggle to survive with their passion.

So I was pleasantly surprised to see Deepan’s version of Dr Caligari. According to Deepan, as told to a newspaper, “The central concern was how space works as a key component in theatre, because, at least in theatre, we never consider it as an important component like text, script or performative body. Space is always a given space.” So he chose a warehouse in the university to set his play. The rest followed.

I was overwhelmed by the production, performances, direction, scenography and adaptations of the play. Every second of Dr Caligari was with performative surprises and sudden shifts in theatrical languages. And the text in this case took a back seat. You return from the play with exaggerated emotions and memories of incredible sets. Wiene’s film reflects the sentiments of that time, depicting an authority that is brutal and insane, manipulating those under its observation to their own whim. Deepan turns the idea of the film on its head, reflecting upon our contemporary times.

I was happy to be with the Kochi-Muziris Biennale team of 20 and everyone was grateful to Deepan and Prakash Bara, who essayed the role of Dr Caligari. It was done with great difficulty and creative freedom for Kerala’s flood relief. We are active in theatre with an International Theatre festival in Thrissur to boot. Yet efforts like Deepan’s need to be appreciated and supported not just morally, but financially, too. It is a rarity. So all the more precious.

This version of the German epic is a dark thriller that evokes the times we live in subject to political climes. In these times of fake truths, this play is a reminder of the truths that we try to avoid but have to live with.