This is the biennale season. With little time left for the fourth Kochi Muziris Biennale to begin, all of us are wishing we had more than 24 hours in a day. There is so much to be done. Every morning, when you return to the office or visit a site, you are struck by yet another task that remains undone. Our emotions are oscillating between anxious despair and macabre excitement. So, naturally, this is the most difficult time to sit down and write a column that is unrelated to what you are preoccupied with. However, a column is neither a date that you can be late to, nor afford to miss. Thankfully, unlike most of my colleagues working at KMB, something fell in front of me like manna from heaven. It was like the timeout that a basketball team yearns for in a tight match. This provided me with the subject for this column.

Before getting there, I must fill you in with something that happened about a year ago. I had gone to Kolkata to see a gallery space, on the invitation of my dear friend, the journalist, critic, gallerist and art consultant, Anupa Mehta. She wanted to introduce me to Richa Agarwal. 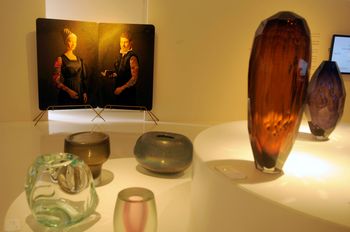 Exhibits at Emami art space in kolkata centre for creativity

Reams can be written about the story of the friendship between R.S. Goenka and R.S. Agarwal. It was on the foundations of this friendship between two Marwaris that the empire of the Emami Group, which built its fortunes in the cosmetic industry, was built. They were one of the first off the blocks in India to see skin care and beauty health care as a sunrise industry.

Today, their children have taken the business to even higher levels. Richa, daughter-in-law of R.S. Agarwal, started Emami Art, a contemporary art space in Kolkata, 10 years ago. However, it failed to make any significant impact. Richa grew up in south India and lived in Coimbatore most of the time, before getting married to Aditya Agarwal. She is humble and down-to-earth but ambitious to the core, which is more a virtue than something to be scorned upon, if you are born in the Emami household.

Anupa had given me a gist of the vision and mission. Emami Art wanted a rebirth and a commitment from me that I would open with my show at their 9,000sqft art space. When I visited the space, it was a work-in-progress. The resurrected space was being designed by Mumbai’s designer-architect-collector Pinakin Patel. I have known Pinakin for almost 25 years as a designer, and he has collected my abstract works. He was developing a 75,000sqft building dedicated to art, design, craft and education of Indian mythology. I was literally floored. Without a moment’s hesitation, I committed to do the inaugural show with Richa, Pinakin and Anupa.

Things can be exciting once the relationship and trust develop; here, Pinakin (aka PK) and Agarwal’s grew with total commitment to create a complex for creativity. Unfortunately, I could not fulfil my commitment, but Emami Art opened with a spectacular show. It was a collection of painting, prints, graphics, products and photography from visionary artist and designer Dashrath Patel’s collection. On November 21, Emami Art and Kolkata Centre for Creativity opened its doors to the public.

My responsibilities with the Kochi Biennale Foundation got the better of the word I had given to Pinakin, Richa and Anupa. However, after I saw Dashrath’s collection, I felt sometimes things happen for the good.