He works under the cover of darkness to make provocative and radical statements. His true identity is the subject of much speculation. Some say Banksy is 3D aka Robert Del Naja of the trip hop band Massive Attack, who was a graffiti artist before he became a founding member of the band. He is credited with pioneering the stencil graffiti movement. But nobody is sure he is Banksy. And nobody can keep Banksy quiet. 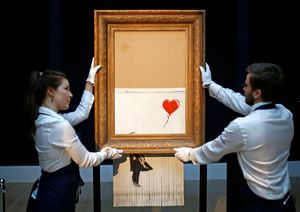 Photo Banksy’s ‘Girl With A Balloon’, half shredded at Sotheby’s/Reuters

Last week, he pulled off one of the most outrageous stunts in the history of art when he automated one of his iconic works, ‘Girl With A Balloon’, to self-destruct after being sold at a Sotheby’s auction for £1.04 million. It was the final item to go under the hammer that evening and soon after it was sold, the canvas began to slide through a shredder installed in the frame. Later, Banksy posted an image on Instagram of the shredded work dangling from the bottom of the frame with the title “Going, going, gone….”

That episode triggered a number of questions about the mechanics of the art market. Banksy was obviously cocking a snook at it. It renewed worldwide interest in Banksy’s work and in the art of graffiti. The history of graffiti is complex and is inextricably entwined with events that make it remarkable and events that push it to obscurity. It had its birth in the Stone Age. Graffiti, dated to 78 BC, has been found in Roman cities with themes of debauchery, opulence and politics.

In 1949, Edward Seymour introduced the idea of putting paint in a spray can. In the early 1960s, controversial people such as Cornbread and Cool Earl started writing on the walls [in Philadelphia], a trend that quickly spread to New York. In 1972, Hugo Martinez started the United Graffiti Artists collective that displayed graffiti in galleries for the first time. This history is vividly captured in Henry Chalfant’s documentary Style Wars (1983).

The decline of the USSR and the fall of the Iron Curtain spawned more expressions in Eastern Europe and elsewhere. This allowed artists like Banksy more freedom, and graffiti began selling in galleries. By 2007, the art had also gained ground in India.

Apart from Banksy, a figure who stands out in the world of graffiti is Jeffrey Deitch. He has been especially engaged with the careers of three of his contemporaries, two of whom were master graffiti artists—Jean-Michel Basquiat and Keith Haring.

The third was Jeff Koons. He ran a gallery called Deitch Projects in New York. But he closed the gallery to become director of the Museum of Contemporary Art, Los Angeles. During his three years at MOCA, he presented 50 exhibitions and projects of which the graffiti show called Art in the Streets (2011) was the most significant. It had the highest attendance in the museum’s history. I was lucky enough to see the show in LA. Then, a couple of years ago, I met Deitch at Art Dubai preview nights and took some selfies.

Something tells me that Deitch was also responsible for introducing some of the most important contemporary artists from the subcontinent like Ravinder Reddy and Shahzia Sikander to the west. I think, he was also instrumental in promoting Iranian artist Shirin Neshat, who incidentally is one of the participating artists in this year’s Kochi-Muziris Biennale. The painting, incidentally, is on the wall closer to home.