Analysis of data shows around 8.5 million jobs need to be created every year 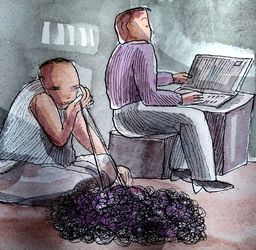 India’s labour force is now around 470 million. Labour force means those employed, plus those in the job market but without jobs. Unemployment data have to be treated with caution. There are time-lags; 2011-2012 was a long time ago. Self-employment is difficult to factor in. Since the bulk of employment is informal/unorganised, how does one get satisfactory numbers? There is the quality of employment too. Let us distance ourselves from the adverse employment consequences of the pandemic since we are concerned with what happens beyond.

An upper limit for the unemployment rate will be 10 per cent. Or, out of 470 million, around 420 million are currently employed. If growth increases by 1 per cent, say from 6 per cent to 7 per cent, this means, with an employment elasticity of 0.20, we will create an additional 8.4 million jobs annually. We now need a fix on how many additional jobs we need to create annually. That, too, has complications. The workforce participation rate has declined not just for women but men, too. Today, it is around 50 per cent. As there is development, it should increase. But simultaneously, rates of population growth have slowed, implying fewer entrants into the labour force. If one plays around with numbers, one will get a figure of around 8.5 million new jobs that have to be created every year, not 10 million or 12 million, as the Planning Commission used to project once.

These numbers are illustrative and no more. With different assumptions, the required growth rate will be 7.5 per cent or thereabouts. As we recover from the pandemic, with more uncertainty because of global developments, I do not think the key question is the number of jobs being created, but quality (contractual, terms of employment, wages). In 2014, Sangita Misra and Anoop K. Suresh from the Reserve Bank of India computed employment elasticities between 1993-1994 and 2011-2012 and found the same aggregate figure of 0.20. Construction was the only sector with an elasticity of more than 1.00. Manufacturing and services were both around 0.30. Within manufacturing, only furniture-making, garments and leather had high employment elasticities. Yes, the data are dated. But trends have probably not changed. There is a skills issue and low-skill activities like construction often provide most jobs. Perhaps counter-intuitively, employment elasticity is higher in organised manufacturing than in unorganised. Productivity is also higher in the former. In choosing labour over capital, productivity matters. Productivity depends on skills.