Prime Minister Narendra Modi was recently in Varanasi, where he inaugurated the Kashi Vishwanath Dham corridor. Anyone who has visited Varanasi lately will know how the city has been transformed. Those who have not visited should have some idea from the events on December 13. A few days before the PM’s visit, I visited Varanasi.

I will not talk about Kashi Vishwanath Dham corridor or Kashi’s transformation. Others have done that. Instead, this is about fountain pens. Contrary to the impression, the first fountain pen made in India was not produced by Ratnam in Rajahmundry in 1935. In 1911, a remarkable gentleman authored a book titled Romance of Pen Industries. This gentleman was Dr Radhika Nath Saha, a doctor, as a member of college of physicians and surgeons (MCPS). But he was also an inventor. Among other things, he invented a type of fountain pen, got patents in diverse countries and set up the Luxmy Stylo Pen Works in Varanasi in 1907. Luxmy pens were the first fountain and stylo (an ancestor of ball-point) pens produced in India. 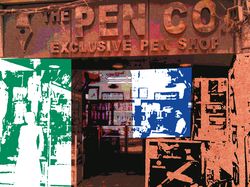 Banaras Hindu University (BHU) was established in 1916. Setting up of universities triggered a demand for fountain pens. Tara Prasad Sahu switched from selling fodder to selling fountain pens near the BHU campus, in the second half of the 1930s. In 1946, this became Penco, which not only sold and repaired foreign brands, but also sold its own brands. With the help of a master craftsman named Bhairon Prasad Vishwakarma, Penco manufactured and sold pens under the brand names Penco and Ebonite.

Varanasi’s layout is explained through ghats and one of the more famous is Dashashwamedh Ghat, where the famous Ganga arati takes place. On the way to Dashashwamedh Ghat, Penco still exists as a pen shop, selling fountain pens, but no longer manufacturing its own brands. As Varanasi has been modernised and renovated, so has Penco. And it is a bit of a pen museum too, stocking rare models of Parker, Swan, Plato, Mont Blanc, Waterman, Sheaffer and Wearever. I visited Penco, now run by Nishant Sahu, Tara Prasad’s grandson.

Penco also has an Eversharp pen with a gold nib, known as the Tagore nib. A Tagore nib is adjustable, varying from flexible to firm, useful for sketching and calligraphy. Rabindranath Tagore, who was fond of fountain pens, possessed a similar Eversharp with an adjustable nib. One such fountain pen is displayed in the Rabindra Bhavan Museum in Santiniketan. It is not his Eversharp, which is one that Tagore donated in 1936.

We do not quite know whether this was the pen that was stolen from the poet’s residence in 1918. It was recovered by the police from the thief, but cops insisted that it was stolen property and could not be handed over without permission of the court. They wanted Tagore to appear in court as a witness. Eventually, better sense prevailed. Four years ago, the Kolkata Police released this anecdote from their archives.

The temple is now managed by a lineage of priests from Kerala. Many temples have plaques in memoriam and I was pleasantly surprised to find one in Dr Radhika Nath Saha’s memory there.