Parliament should be representative, not elitist: Bibek Debroy

Surveys come up with apparently inconsistent conclusions, because the sample, or methodology, varies. How many times a day does a person look at the mirror? With variation across findings—and there is a gender angle, too—the average is around 20 times a day, say 15 minutes. Whatever be the figure, our eyes are naturally meant to look outwards, not inwards.

Recently, the chief justice of India delivered a talk, on the occasion of the 75th Independence Day. As reported in the media, he argued (a) Quality of Parliamentary debates has deteriorated; (b) Ambiguous legislation and bad drafting leads to litigation; and (c) There should be more lawyers in Parliament and state assemblies. 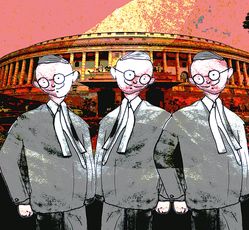 There is a bit of GOD (good old days) syndrome in all of us. The past was better, if not glorious. The present is bleak. PRS data show around 4 per cent of Lok Sabha MPs have law degrees now. That does not, of course, mean they are practising lawyers. In 1952, the figure was over 35 per cent. There is a proclivity for those with law degrees to take to politics, or those with a career interest in politics to obtain law degrees. Given education levels and access then, it was natural for Lok Sabha (and Parliament) to be elitist immediately after Independence, with a preponderance of law degrees.

In a democracy, not an aristocracy, Parliament should be representative and not elitist. There are figures on the number of registered lawyers. I do not think there is a reliable number on what percentage of the population has a law degree. Whatever be the number, if Lok Sabha is to be representative, even with that 4 per cent, lawyers are actually over-represented and small farmers (not large farmers) and businesses are under-represented. On the latter, we might have better laws if Parliament understands constraints to functioning of business and entrepreneurship better.

Lewis Carroll put it well. “In my youth,” said his father, “I took to the law, and argued each case with my wife; and the muscular strength, which it gave to my jaw, has lasted the rest of my life.”

While we would like more discussion and debate in Parliament, it is doubtful that the visible part should be used as a metric for Parliament’s efficacy. For that matter, wit and repartee is no longer as common in courtrooms. Bad drafting leading to litigation is an incontrovertible fact. Is a lawyer necessarily good at drafting? There is a Plain English Movement that has swept through many countries, leaving India and India’s courts untouched. Plain English manuals are replete with instances of bad drafting by lawyers. There was an instance where the Supreme Court sent back a Himachal Pradesh High Court judgement, finding it to be incomprehensible.

Clear language, curbing litigation, is a desirable template that applies not just to statutory law, but also to case law. And so far as the GOD syndrome is concerned, I have whiffs of nostalgia for the 1950s, when courts functioned better, by any metric.