Google Doodles are temporary. On July 19, Union Education Minister Dharmendra Pradhan answered a question in Lok Sabha about female versus male graduates in STEM (science, technology, engineering, mathematics). The All India Survey on Higher Education (AISHE) shows that the share of female graduates has increased over time. It is around 43 per cent now. Cross-country data reveal that this percentage is more than what it is in many “advanced” countries.

Roughly when Parliament was told this, Google’s homepage in India had a Doodle on Kadambini Ganguly—on July 18, her 160th birth anniversary. In our student days, there was a staple quiz question and we had the answer down pat. Who were India’s first female graduates? (There were similar questions about the first woman to get a pilot’s licence and the first woman commercial pilot). The answer is Chandramukhi Basu (1860-1944) and Kadambini Gupta (1861-1923). Of the two, more has been written about the latter. 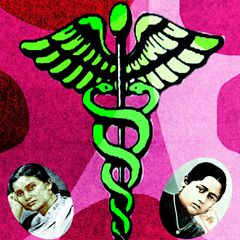 At the time, the University of Calcutta’s geographical jurisdiction was considerable, and the function of universities set up in 1857 (Calcutta, Madras, Bombay) was to examine, not teach. That was the model in Britain, too. University of Calcutta, accordingly, had an entrance examination to determine whether a student was qualified to be admitted. The entrance examination was followed by FA (First Arts), BA, MA, and so on.

Chandramukhi belonged to a Christian family from Dehradun, then part of United Provinces of Agra and Oudh. She passed her entrance examination in 1876 and her FA in 1880. It took four years because the university refused to recognise that a girl could clear the entrance exam. That change occurred in 1878. Kadambini (born Basu) passed the entrance exam in 1878. Both of them graduated together, from Bethune School, in 1883. Thus, they were India’s first female graduates.

But the quiz question and Google Doodle miss a substantive point. They were the first female graduates not just in India, but in the entire British Empire. Oxford had its first female graduate in 1920. Cambridge did so in 1921, but offered a diploma, not a degree (In both places, women were admitted and taught, from 1879 for Oxford and 1881 for Cambridge, but they were not awarded degrees). Therefore, when Chandramukhi passed the MA exam in 1884, she was also the first to do so in the entire British Empire. She stuck to academics, while Kadambini became a doctor; which is one reason why her story is more familiar (such as through TV serials) than that of Chandramukhi’s.

With the lens of western medicine, who was India’s, and Asia’s, first female physician? That qualification, “western medicine”, is necessary because there seems to have been a female vaidya named Rusa, whose work on Ayurveda was translated into Arabic in eight century CE. The answer is Kadambini, who got a medical degree from Calcutta Medical College in 1886.

There was also Anandi Gopal Joshi, who had to go to the US to get her medical degree in 1886. The story of her struggles is remarkable. (Her biography has been written and there are biographical films and plays, too. She was honoured with a Google Doodle in 2018). Few people remember Biraj Mohini Mitra (born 1860), married to a doctor named Manmatha Nath Dutt. She wanted to join Calcutta Medical College in 1875. But admission was refused, though the family offered to arrange for separate (screened) seating in class and her husband’s presence when dissection was taught. (The Biraj Mohini school and hospital in West Bengal must be named after her.)

Newton spoke about standing on shoulders of giants. Current STEM numbers stem from just that.