Bibek Debroy writes on the unique stepwells of India 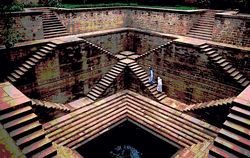 I cannot say I like the expression stepwell. Though not quite a portmanteau word, it sounds like one.

Indian words, often derived from the Sanskrit vapi, are more evocative. A stepwell is a well you step down into, using steps. Stepwells are important for conserving water—a resource scarcer than we tend to think.

“Most stepwells are located in north and west India, whilst some stepwells have achieved broad visibility (such as the UNESCO World Heritage listed Rani ki Vav in Patan, Gujarat), many stepwells are sadly neglected and under threat of encroachment, damage or even complete collapse.” This quote is from Stepwell Atlas, a community-driven initiative to document stepwells throughout the world.

If you look at the Stepwell Atlas map, India (and Pakistan) are dark. They are dense with stepwells, though these wells exist in other parts of the world, too.

Most people who live in Delhi are familiar with Agrasen Ki Baoli. If nothing else, films and television have made it famous. There are people who are fascinated with stepwells, like Vikramjit Singh Rooprai. A few years ago, he wrote a book on Delhi’s heritage of stepwells, mentioning 32 and profiling 10 in detail. There is also Jatin Chhabra, who catalogues stepwells on his website, visits them and wants to publish a guide on ancient Indian stepwells. He has been preempted a bit, because the National Water Mission (NWM) has just published such a guide—titled Stepwells of India.

However, this is not comprehensive, since this guide only includes 23 (and mentions 100) from Rajasthan, Gujarat, Maharashtra, Karnataka and Andhra Pradesh. The span is from Dholavira (circa 2300 BCE) to Wankaner (1923), close to 5,000 years. But obviously, this guide is not complete, since it says there are 10,000 stepwells in Rajasthan, citing numbers from Central Ground Water Board.

NWM does not give us estimates for the other states. Non-government sources suggest 1,300 in Maharashtra, 140 in Andhra and at least 100 in Gujarat. Whenever Chhabra or someone else decides to prepare an exhaustive guide, we will have a much thicker volume.

The NWM book tell us, “According to classical texts,” there were four types of stepwells—Nanda, Bhadra, Jaya, Vijaya. Nanda is the simplest, with one entrance. Bhadra has two separate flights of steps, at opposite ends. Jaya has three flights, while Vijaya has four, in four directions.

The citation for this is Morna Livingston’s 2002 book, Steps to Water: The Ancient Stepwells of India. There is no doubt that Livingston’s book is fantastic, especially from an architectural point of view, with spectacular photographs. Plus, there is Victoria Lautman’s 2017 book, on India’s vanishing stepwells.

But for that taxonomy of stepwells, as given by classical texts, do I need to refer to Livingston? (There is a separate taxonomy for wells.) Aparajitapriccha, Bhrihatshilpashastra and Rajavallabha are not difficult to get hold of, even in translation. All four have this taxonomy, Aparajitapriccha probably being the first. However, most people have not heard of these texts, because we do not read or disseminate them. Most people have not heard of stepwells, or visited them.

They seem to be of greater interest to people from the west and we regurgitate information when it is perceived to be of value to the west. We have traditionally had these systems of water conservation. Till the 19th century, stepwells seemed to be around and were vibrant. The decline and decay dates to the late 19th century and 20th century. The British did not like stepwells; they favoured more hygienic and alternative sources of water, with pipes, drilling and boring.