Barkha Dutt writes on the Congress and the Punjab pickle

The Aam Aadmi Party and Arvind Kejriwal have already pushed the Congress in Punjab into borrowing from its playbook. The party says it is seeking feedback on who should be its chief ministerial candidate, much like the AAP did before naming Bhagwant Mann as its contender. In 2017, Captain Amarinder Singh threatened to quit and form his own party if the Congress did not declare his name for the top job. In 2022, Charanjit Channi and his supporters have been forced to point out the obvious. The absence of cohesion in the Congress campaign and the lack of clarity over who its leader is has handed the advantage to its challenger.

The Congress has a problem in Punjab and his name is Navjot Sidhu. Sidhu’s elevation was billed initially as Priyanka Gandhi Vadra’s decisive intervention. It has turned out to be a colossal self-goal. Sidhu is plagued by delusions of grandeur. At the highly fortified Chandigarh bungalow that is presently his base, the cricketer-comedian makes mercurial appearances before the media when he is in the mood. At other times, nervous aides speak in hushed whispers about how he cannot be disturbed. On a recent trip, one of them told me grandly that it took five days for anyone to get some time with Sidhu, sounding like an overawed supplicant in obeisance to a feudal landlord. 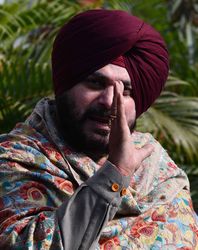 More critically, as an aide in the Channi camp told me, every decision announced by the Punjab chief minister was “mocked” by the ambitious, egotistical president of the Congress’s Punjab unit. “We announced a waiver on electricity bills and he calls it a lollipop,” said the aide, despairingly. Sidhu pointedly left out posters of the chief minister from his press conference to unveil a blueprint for Punjab’s development.

The original idea was that Sidhu would keep Jat Sikhs on the party’s side while Channi, the state’s first dalit chief minister, would pull in the votes of the scheduled castes. Sunil Jakhar, the third face in the troika of Congress leaders, was meant as the Hindu face. Jakhar, also sulky, left for a trip abroad, claiming he could preside over ticket distribution over a Zoom call instead. And the chief minister, bruised by the constant undermining of his authority—an eyewitness says Sidhu lashes out at Channi even in party meetings—has openly pushed the party to name a chief ministerial candidate.

Sidhu’s rantings have made Congress voters on the ground doubtful. While the party made the right call in dropping Amarinder Singh, even if it handled the process clumsily, its delay in publicly endorsing Channi has made his followers sceptical about whether Channi will get to keep the top job even if the party were to defeat the AAP. In the villages of rural Punjab, Channi is universally liked. I did not meet anyone who said anything adverse about the chief minister. But, among Congress voters, their statement of support would invariably trail off into ‘ifs’ and ‘buts’. In Ludhiana, a long-time Congress voter told me, “I am embarrassed today to tell you that I support the party; every time Channi takes one step forward, Sidhu takes him two steps back.”

Sidhu’s induction was billed as Priyanka Gandhi’s Ahmed Patel moment, in reference to Sonia Gandhi’s crafty former political aide who died last year. Instead, in the Punjab context, it is a giant blooper, of the sort we saw on Sidhu’s slapstick TV shows.